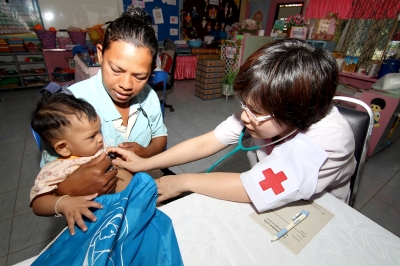 Representatives from Doctors Without Borders (Medecins Sans Frontieres or MSF) recently released estimates that over one million Congolese are living with HIV. Despite such high rates of infection, there are remarkably low rates of treatment, care and support. Children orphaned by parents who succumb to HIV are less likely themselves to receive healthcare and other needed services. They often face malnutrition, illness and HIV infection. They often fall prey to exploitation of many kinds. Only an estimated one percent of pregnant women living with HIV have access to treatment that would prevent them from passing HIV along to their unborn children. About one-third of babies exposed to HIV in the womb will end up being born with the virus which, worldwide, equates to about 390,000 children – most of them in low income countries. Around 90% of all children living with HIV acquired the infection from their mothers during pregnancy, birth or breastfeeding.
Once infected, children are more susceptible to malnutrition, tuberculosis, toxoplasmosis and other bacterial infections such as meningitis. Doctors Without Borders have noted that international donors are giving less money to the HIV fight due to the global financial crisis squeezing aid budgets. This has prompted the Doctors Without Borders organization to publically call for governments around the world (including the DRC and the United States) to beef up funding. What makes the HIV issues in DRC so particularly difficult is that the country is not just battling an HIV crisis but also internal conflict as well. Additionally, limited infrastructure makes access to remote areas difficult at best making financial assistance even more essential.
One example of US assistance is the President’s Emergency Plan for AIDS Relief or PEPFAR is actively supporting the DRC’s AIDS response; contributing more than $75 million to the cause between fiscal years 2007 and 2009. But unfortunately, the latest United States budget showed a 92 million dollar cut in AIDS programming and with an interest in deficit reduction, future funding of efforts such as PEPFAR looks bleak.
While large scale funding efforts are vital to the in country efforts, efforts of NGO’s to facilitate the adoption of children caught in the HIV crossfire, are just as vital. Smaller, more grass roots organizations such as Project Hopeful (a private nonprofit orphan advocacy group based in Illinois) are assisting with “educating, encouraging and enabling” families in the U.S. to advocate for and adopt children in Africa with HIV exposure. While these groups operate on a much smaller platform than federal governments, they are no less essential and certainly no less effective, to the effort. HIV exposed children tend to be one of the most marginalized groups in the adoption arena.
Project Hopeful and similar organizations find that education is sometimes the key to parents taking the leap in adopting a special needs child such as those with HIV exposure. For example, who knew that the National Institute of Health reports reveal that the medical community now thinks of HIV as something akin to Type I Diabetes and that modern drug treatments such as antiretroviral therapy can render the virus practically undetectable within six months?
MLJ Adoptions is also prepared to assist families in education and adoption through our Waiting Child Photolisting. In concert with research based findings, families involved in the special needs program are required to go through at least ten additional hours of education beyond what is required of all adoptions to receive more training on the specific need at hand, such as HIV. Availability of children for adoption range from infancy to teens, both boys and girls and of African, Latino, Easter European and Polynesian descent. Please contact us for more information.