A Tale of Three Crèches 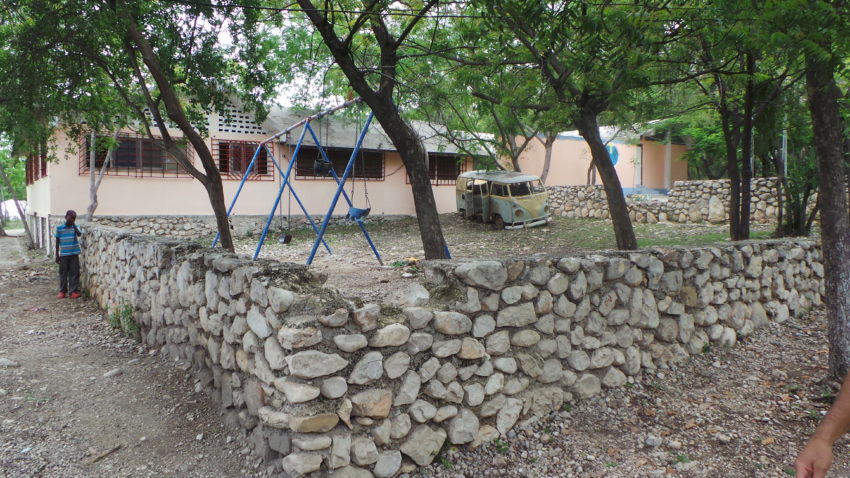 In Haiti, most children eligible for adoption live in crèches, or orphanages. Crèches may be funded privately or publicly, but a crèche must be approved by IBESR, the Haitian government body that oversees international adoption. From what I have observed, crèches take on the “identities” of their funders and directors; for this reason they can each have a slightly different look and feel when you visit them.

Safety in Haiti is a serious concern due to the high levels of poverty, homelessness, unemployment, and shortages of water and medical care. Crime is a constant threat, and crèches are usually protected by high concrete walls, locked gates and/or fences. In cities such as Port-au-Prince, there are few green spaces for the children to play, so they rely on concrete or dirt/rock playgrounds. There is also no air conditioning, but everyone seems used to that except for the American visitors. Crèches in the countryside have more ground to wander around, and a few concrete areas which are often used for basketball and other games.

The number of children in each crèche varies, as does the age range of the children. We saw crèches with numbers ranging from 30-60, from infants to teenagers. The staff we met were all generally pleasant, but the language barrier prevented conversation. They all seemed to go about their assigned daily chores and routines of watching children, cooking, washing clothes in outdoor washtubs, doing dishes, or holding school activities. In general, we found the children to be clean and clothed and their hair was kept neatly. Some crèches had the children in uniforms of shorts and t-shirts; others did not use identical dress. Many wear little Croc shoes, sandals or tennis shoes; quite a few are barefoot. The clothing was much like what you would see in the US.

I was fortunate to have visited three Haitian crèches last year. Each facility had a different appearance, different types of supervision and staffing, and each one seemed to offer different styles of care for the children. What they all had in common, however, were the affectionate and curious children who lived in them.

In Port-au-Prince, the first crèche was surrounded by high concrete walls with a barbed wire top, welcoming you with brightly painted pictures of Dora the Explorer, the Muppets and cartoon characters. We had to bang on the gate and soon a small door opened for us to enter. Little sets of eyes gazed at us inquisitively to see who we were and what we were doing there. Being Caucasian, we did stand out! Most of the children remained still and cautious, but an occasional toddler would amble over to us begging to be picked up. The smiles—ah, those beautiful smiles—started out timid but ended with big toothy grins as we gave them attention and encouragement. Even the language barrier didn’t hide their need for companionship. The children wanted desperately to be touched, hugged and held. Some of the older children sat contentedly beside me and simply held onto my hand. The power of touch is amazing! There was a playground area with swings, a teeter totter and riding toys, but it was abandoned. The children were generally all clustered together in the middle of the play yard with a group of very small children playing somewhat unsupervised on a raised dais. Older children tended to go over to care for them if someone cried or became too aggressive with another child. The staff seemed more focused on other duties, but there were a number of caregivers present. There was a long table outside with little chairs for eating and one for school work. 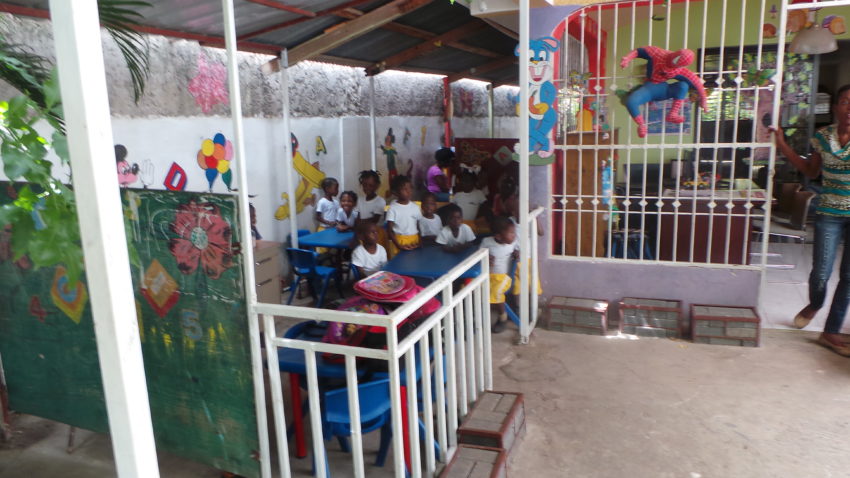 We spent time with several children who are in the process of being adopted by our client families. We conversed with them via a translator and took pictures. When we pulled out a bag of candy, we were given permission to distribute it to all of the children. Apprehensive at first, when the children realized what we had, they clamored to us with hands excitedly outstretched. Many said “Merci” (Thank You) if they were old enough to talk. As children do, a couple of children worked to obtain multiple pieces of candy, but more often I saw four and five year-olds take this candy to a two or three year-old farther back in the crowd to share with them. Kindness was evident in these little angels.

Inside the crèche was a comfortable reception area with beautifully crafted Haitian wood furniture, and a dining area which appeared to be unused. There was an indoor kitchen, but it too was not in use. Sleeping rooms contained rows and rows of iron baby beds or bunk beds. Mattresses had sheets, but no pillows. Several babies were in swings on the outdoor porch with a caregiver. The facility is tidy and multiple staff were seen caring for the children. Upon departure, some of the children cried, and one little girl would not let go of my hand until I gently explained that we had to leave. Leaving a crèche is definitely the hardest part!

Our second crèche was also in Port-au-Prince. Located on a paved street near IBESR, this orphanage was also protected by high walls and a steel fence. A guard granted us entry and we waited outside until we were greeted by the director. Our outdoor seating was made from tires and brightly painted. Yes, it was quite comfortable! We soon saw that through someone’s ingenuity, much of the children’s outdoor play equipment was also made of these colored tires. Swings, climbing towers, planters, riding toys made in the likenesses of animals, and a sandbox all carried this theme of bright primary colors.

Inside, we were greeted by the director who chatted with us about children that have been identified for adoption with our agency. We discussed them in depth, visited with them and took pictures. As school was in session for the older children in this crèche, we were not able to tour the educational or sleeping areas. At this crèche, the staff wore white aprons and protective hair coverings. They seemed friendly but again, there was a language barrier which kept us from conversing too much.

Soon, they escorted us outside to the play area. Without warning, a little fellow of about two or three ran the entire length of the play area and jumped into my arms for hugs and attention. Smiling, laughing, and hugging my neck, he only wanted the touch of another person and to feel special! Four little girls were being pushed together on a tire swing. Children played on the tire animals and walked about the play area. Like the other crèche, the children clamored for the candy we offered and clearly enjoyed the sweet treats. It was so hard to leave here! My heart was clearly drawn to that first little boy who jumped into my arms, wishing I could take him home!

Our third crèche was out in the countryside near the ocean. The crèche was protected only by a fence, and the multiple buildings located on the grounds seemed very quiet. Walking along the dirt driveway to the office, we actually saw no children. There were several adults in the office, which did have a laboring air conditioner, and they told us their director was out of town. We explained our purpose, and one of the staff went to locate the children with whom we were working. We went to wait on a covered porch after walking around some of the other buildings: the dining hall, dorms, the nurse’s office, a school area, and a blacktopped area which may have had a basketball hoop at some previous time. We learned one long building was used to “farm” fish, as this generated operating capital for the crèche. While waiting, we saw some older girls emerge from one of the dorms holding little girls. They appeared to be providing supervision. When our children arrived, the older boy said he had been sleeping. However, he seemed glad to see his prospective parents who were also visiting with us. The little girl arrived dressed up and was smiling at us. It was hard to tell if she felt obligated to smile so big or if she just had the biggest smile I have ever seen! The children here were not in school as it was summer. It was very hot outside and there were a significant number of mosquitoes, so there was a good reason not to be playing outside! Nevertheless, this crèche seemed to offer more questions about the children’s care than answers.

As you can see, all three of these crèches are different from the other. Charged with the care of vulnerable orphans, they offer the basics and at times provide them with a few extra toys or activities. Many appear stark in decor, especially in the children’s bedrooms, but we have to remember that Haiti is a third-world country, and these crèches have very limited resources.

As I reflect on my time at the crèches, I know those hundreds of little eyes will forever be with me…those big eyes that were wide with wonder, bright with joy when given one-on-one attention, excited when candies were offered to them, inquisitive when we first arrived, and relaxed when they were being hugged and loved. These are the eyes that look daily for their forever parents, the ones who will take them from this crèche and give them a loving permanent home. They are the eyes that wait patiently for their time, their turn for a family. They are the eyes that assure me that what I do for a living in international adoption is worthwhile. 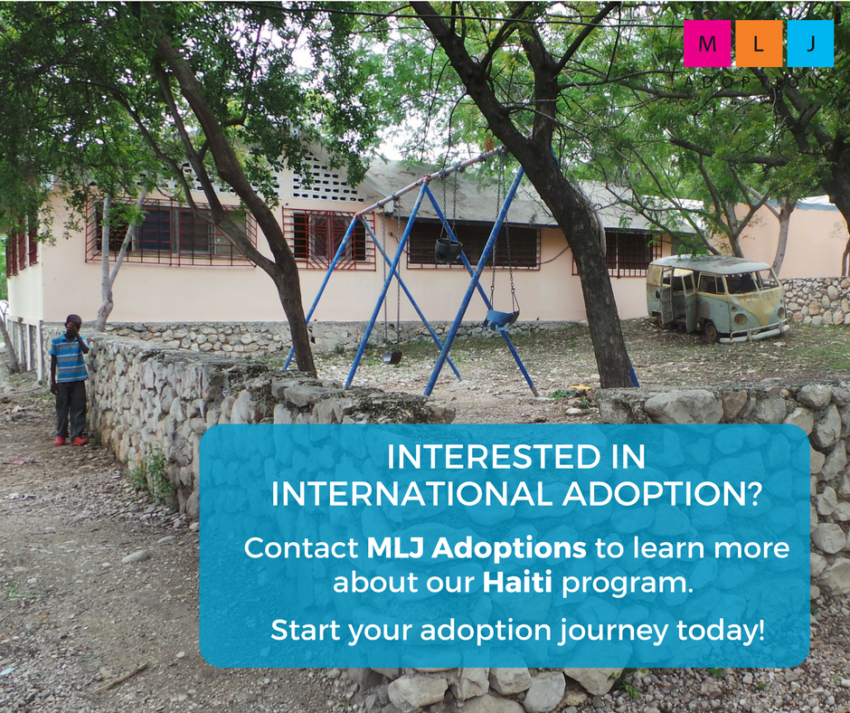