All Children Have a Human Right to a Family 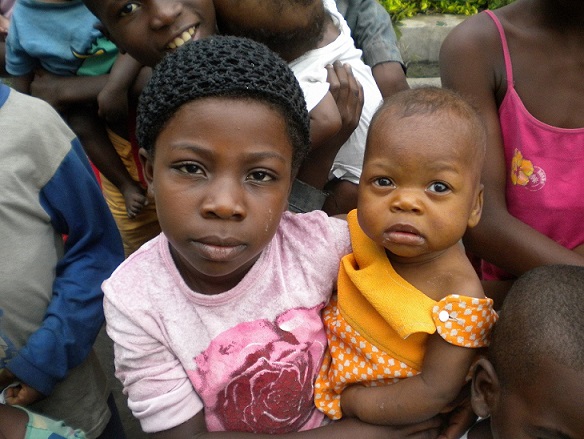 The dirt road was wide and lined by corrugated metal structures housing a variety of homes and small businesses. A concrete trench ran between the structures and the road. The dust kicked up giving everything a fine brown-gray layer of dirt. People milled about, glancing curiously at us.

We arrived at the end of the road and stepped gingerly on the scrap wood laid across the trench. We avoided looking down and hoped that the wood would hold us. On the other side, we entered a grouping of cement block buildings identified as an orphanage. One of the workers gave us a tour.

One of our first stops was a small room used as a kitchen. The walls were empty, no cabinets. The tables inside had only bare shelves, no cabinets. There was no food in sight. Where did they keep their food? Did they have any? There were no answers from the staffer who did not speak our language.

Next we entered a small dark room lit only by the natural light coming in from narrow slits of windows at the top of the walls. A chalkboard hung on one wall. Desks and chairs were pushed up against each wall leaving a small empty space in the center of the room. Although, it had the appearance of a classroom, it didn’t seem to have been used recently. I glanced at the concrete floor and was surprised to see an infant sitting alone in the center of the room in the darkness. The infant was silent and was making no effort to crawl away.

The orphanage staffer briskly walked to the door of the classroom and yelled out a command obviously demanding that another staffer come and get the child. After a pause, the surprise of seeing an unattended infant alone in the darkness was replaced with the surprise of seeing a slender girl of ten or twelve rush in and swing the infant with a practiced motion up to her hips. She marched out of the room.

Later, the staffer gathered together about twenty children of a variety of ages for a photo opportunity for our benefit. The children lined up proudly in front of their orphanage sign. The girl I had seen previously still bearing the infant on her hip joined at the end of the line of children. Nearly two years after this visit, the look of defiance and determination on this tween’s face has never left my memory.

This is the face I see when I come across statistics about vulnerable children. A global profile was released by the U.S. government International Assistance for Children in Adversity. According to this survey:

These statistics represent the fates of some of the children who age out of institutions, children who never know the love and safety of a loving, permanent home. Will it be the fate of the young girl whose face made such an impression upon me? I’ll never know.

Although, international adoption has experienced a decline in numbers over the past year, I cheer the developments that are leading to an uptick in older child adoptions. Every child has the human right to a family; not just infant girls but six-year old boys and eleven-year old girls and HIV positive children and children who have suffered the effects of polio.

The MLJ Adoptions Special Needs program is designed to match these harder to place children with families who have the characteristics and skills required to parent these children successfully. Are you the one? Is there a child out there who will fit into your family? Photo used with permission.