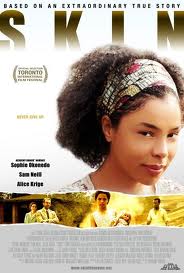 “In the end, SKIN isn’t a movie about skin at all, but the indomitability of the human spirit." – Michael O’Sullivan, Washington Post review.

The movie SKIN is set in Africa, during the apartheid era, and relates the true story of Sandra Laing (played in the movie by Sophie Okenedo). Apartheid is described in the free dictionary as an official policy of racial segregation involving political, legal and economic discrimination among non-whites. This caste like governmentality laid the ground work for the present day political instabilities, ethnic tensions and atmosphere of dissonance of many African countries.

Sandra was born to pro-Apartheid white Afrikanner parents in 1955 and, was officially registered as a white child despite bearing distinctly black features. Her parents attributed her physical appearance to an interracial union very far back in their ancestral history but without the luxury of DNA, there were loud community whispers about the fidelity of Sandra’s mother. We know now that genes that are dominant can actually lie dormant for years (polygenic inheritance) and suddenly influence physical appearance.
There is a complex dynamic between Sandra and her parents as her parents are in obvious favor of segregation but appear to not see their child as how she truly looks. They seem to ignore any feelings of inadequacy or poor self esteem that can result from a black child being raised in a white family that ignores the racial differences. In the movie, the actions of the parents sometimes leaves the audience wondering if this refusal to acknowledge their daughter’s obvious physical differences is self preservation for them or just an ignorance of how to accept and portray their transracial family. The film is a grave reminder that; families must be vigilant and intentional regarding their planned responses to others in their community. And regardless of the family’s intent, transracial families are subject to criticism and comment of all types.
By adopting, a transracial family becomes a minority in most communities. A planned response to the criticism and comments that can rise from ignorance can alleviate any worry or concern about what to say or when to say it. Parents must be comfortable with their own prejudices in order to assist children in this process. We cannot ignore the obvious, and differences within families should be celebrated, and recognized, and not ignored. Children adopted by Caucasian parents from countries such as Congo, will be subjected to some kind of racism at some time because we do not live in the bubble of our immediate family. Parents are responsible to not only educate their children but also educate their community. Oftentimes, they can best do this by modeling good behavior. Not having a concrete plan threatens the security of the children as they look to the parent for social cues.
Children must have positive role models that look like them. In the film, Sandra was a tragic victim of an archaic social and governmental system, while synchronously, an enduring symbol of survival. She was met with a lifetime of trauma and identity confusion as she struggled to assimilate and was met with rejection by both the black and white communities. As a child, Sandra did not know other families that looked like hers. Her parents knew no better and failed to understand the importance of insuring that Sandra felt comfortable with her place in her home and in her community. Parents, today, should know better. MLJ Adoptions offers a full range of pre and post adoption education and support classes that can assist parents.
Photo Credit