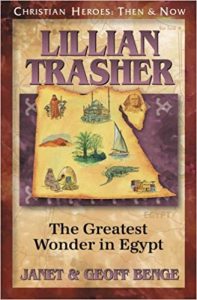 Lillian Thrasher – The Greatest Wonder in Egypt is one of a series of biographies, “Christian Heroes, Then & Now,” written by Janet & Geoff Benge who are adoptive parents. My 25-year-old daughter, a passionate adoptive sister, heard about Lillian Thrasher and remembered this set of biographies in our home library. Following her suggestion, I pulled it out, grabbed a cup of hot green roasted tea, and quickly became engrossed in an amazing story about a fearless young woman who started an orphanage in Egypt and eventually impacted nearly 10,000 children. This story is for anyone who cares about vulnerable children. This story is for anyone who believes God can take a small spark and grow it into a great glorious flame affecting generations.

Lillian’s story started as a 17-year-old girl from Asheville, North Carolina, who boarded a train bound for Georgia. With a passion and talent to sketch, she hoped to land an entry level job at the prestigious Atlanta’s Georgian newspaper. Through a series of disappointing events, she was denied the job. Feeling unsettled and in search of her calling, she headed to Faith Orphanage in Marion, North Carolina, where she was offered work by a stranger on the train. Unbeknownst to Lillian, this was training for a future she could not possibly fathom. At Faith Orphanage, she cared for one hundred children and learned that “living by faith” was not easy, but it was thrilling to see that needs were provided for day after day and every need was met in surprising ways.

Hearing about a conference being held in Pittsburgh, Pennsylvania, Lillian prayed for the $18 needed for train fare to attend the conference. Within days, Lillian had exactly $18; however, the money was mistakenly used for an orphanage food bill. Lillian prayed again but received $10 which was only enough money to get her to Washington, D.C. Arriving in D.C. through an act of faith, Lillian showed up at the door of a friend of a friend to ask for lodging. Consequently, a missionary from Egypt was already lodging at the house. As they shared lunch together, Lillian had found her first contact from the continent of Africa where she felt she was being called to serve.

Eventually Lillian, along with her sister, would end up in Egypt with her new missionary friends, the Brelsfords. Now, don’t think her journey was without conflict! Most people, including her parents and friends, thought it a very foolish venture for a young, single woman to travel in the early 1900s to Africa to work with orphans. She was determined however, and so, on November 10, 1910, Lillian Thrasher set foot for the first time in Alexandria, Egypt.

Lillian spent the first three months working at a mission house in Assiout, Egypt. One night after dinner, a loud banging on the door would change the course of Lillian’s life. A desperate man asked someone, anyone, to come with him quickly. Lillian was chosen to go. She

was led to the home of a frail, starving baby. The baby’s mother, a young teenager, lay dying. If Lillian left the baby in the care of the remaining family members, they would drown the baby. After all, “It was only a girl,” and surely, the baby would die anyway.

Devoted to the infant, Lillian spent the next ten days lovingly caring for baby Fareida in hopes to keep her alive. A very sick, wailing baby, disrupting the sleep of the mission house, caused Lillian to receive an ultimatum, either she had to return the baby or leave immediately. Being seasoned to live by faith, Lillian and her sister walked out of the mission taking the baby with them. This was the beginning of the Lillian Thrasher Orphanage. Miraculously she was provided a home, and almost immediately children began showing up at her door. From that time forward, there would be no end to children joining her family. These children would be loved and educated. Lillian would not only meet their physical needs, but she would make it a priority to meet their spiritual needs by teaching them of God’s love for them. In God’s eyes, each one was precious, and she wanted them to be keenly aware of that reality. Some of her children would become pastors in Egypt leading congregations to a deep relationship with Jesus. Others would go to the university and get impressive jobs around the world. Yet, some would stay and care for the next generation of children at the orphanage.

On the day Lillian died, December 17, 1961, two more babies were added to the orphanage. Her earthly life may have ended, but her work with orphans continued. She would become well-known around the world, and a movie would be made about her, Mother of the Nile. “In the midst of poverty, war, and deadly epidemics, Lillian faced each day with a heart of trust.”

Why should an adoptive mom, busy with 6 kids and 2 grandchildren read this book? This book sheds light on the circumstances and difficulties from which most adopted children come – particularly children adopted from Africa who come from difficult pasts where they have lived in institutional settings such as the ones depicted in this book. Some days are tough for all adoptive parents. They become tired and may even want to give up. I myself forget why I am dedicating my life to adoption work, and I might even forget that I felt called to do this work. I gain great strength by remembering that other people have traveled this road with even more difficult circumstances. To see that others have traveled the same road or perhaps an even more difficult road can help adoptive parents get through the day and anticipate tomorrow with a heart of love and trust. Reading this book will provide inspiration to those interested in helping vulnerable children or prospective adoptive parents hoping to add these children to their families.

Camie serves as MLJ Adoption's Financial Resources Coordinator. She successfully raised over $50,000 for the adoption of her two daughters from Vietnam. Camie is a pastor’s wife, busy mother of five, educator, and advocate for the fatherless.

Camie serves as MLJ Adoption's Financial Resources Coordinator. She successfully raised over $50,000 for the adoption of her two daughters from Vietnam. Camie is a pastor’s wife, busy mother of five, educator, and advocate for the fatherless.