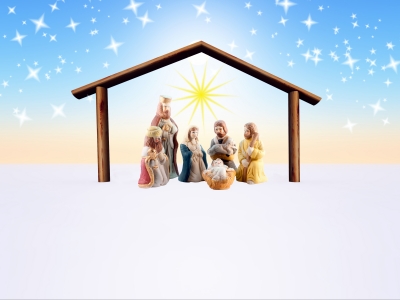 On the 16th of December, the Christmas celebration in Calnali, Hidalgo Mexico begins. People believe that on this day, Mary and Joseph started their journey to the Posadas (inns) in Bethlehem, and in Calnali they reenact this journey with religious celebrations. The Christmas holiday is from December 16th until the 24th, making eight nights of Posadas and one final night; the night of the 24th and the most important night of Christmas. On each night leading to the 24th, the Posadas take place in the village center where the church is located.

When I was young, my cousins and I used to be so excited about the Posadas because we knew that there would be piñatas, and therefore candy. Each night after mass, everyone would go in front of the church for the piñata and all the children would wait impatiently for someone to break it. Nobody wanted to break it because by the time he or she removed the blindfold, the goodies would already be gone. The girls really had to put up a fight against the boys because normally the boys would get most of the surprises. Today, piñatas are made of paper maché, but in those days they were made of clay covered with colorful paper. When the piñata finally broke, it would shatter into many pieces, and some kids would be pelted with broken fragments of clay, but no one cared because that was the only chance to get candy. Normally, the piñatas were filled with fruits from the region such as oranges, sugar cane, mandarins, and other fruits, and very seldom some candy would be added to the piñata, which the children always hoped for.

The Posadas typically begin at dusk. A group of people goes inside of the church and closes the front door. Another group stays outside carrying the life-size figures of Joseph and Mary and sings, “In the name of heaven I ask you for shelter.” The people inside sing, “There is no room in the Inn.” This exchange goes back and forth for a while. After that they open the doors of the church and everyone goes inside singing, “Come in holy pilgrims…. holy pilgrims,” and the mass begins. After the mass everyone goes outside to break the piñata, and then on to the dance in the square where the Indian band plays until three a.m.

On the 24th of December, the whole town goes to the church and waits until midnight for the birth of Jesus. Some people stay up all night praying inside of the church. The priest then brings out a baby Jesus made of clay and everyone goes in front of the altar to kiss Him.

On the 25th of December, there is another mass and people prepare some of their best meals. Most of the families prepare enchiladas, turkey in a hot red sauce called mole, and tamales. The people in larger cities celebrate the Posadas in their homes, and it is more of a fiesta, rather than a religious ceremony. They invite relatives and friends, and provide food, beer, tequila, and everyone’s favorite hot punch. They also have many piñatas for the children and the adults.