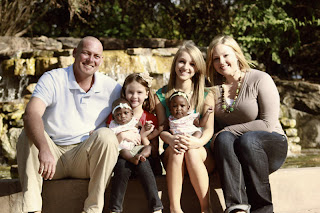 Ami admits, "before I began the process of adoption in the Democratic Republic of Congo, I had no idea where it even was on the map. After a seven month whirlwind of paperwork, fundraising, chasing down documents that I didn’t know existed, making new friends with other adopting moms, overcoming obstacles that seemed to be the end of the world, and learning about this war-torn country, I was united with my twin baby girls from the DR Congo. What a blessing these girls have been! While I felt my family was nearly perfect, I continued to be plagued by the millions of children that are left behind and the women who are raped repeatedly and brutally. In some areas, two-thirds of the women have experienced some form of sexual violence. My daughters’ biological mother was one of them." 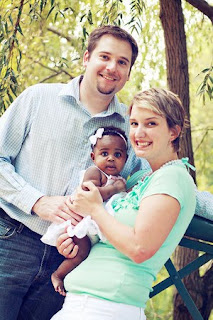 Bonnie shares, "I had no idea when I started the international adoption process, that there is a war raging in central Africa that has killed more people than WWII. 5.4 million people have died since 1998 in what has been since called "Africa’s World War." The death toll is the equivalent of a September 11th event every 2.5 days. Sadly, nearly half of the deaths in the Congo are of children under the age of five. This struck me hard. How could I adopt without giving back to the country that my daughter called home? During my adoption process I learned about our daughter’s country and it’s history. I became involved with raising money through Women for Women International’s Run for Congo program, gave my own money towards the sponsorship of a Congolese woman, and participated in a 5K in Chicago in order to give back to programs that assist women and children in Congo.
The proceeds from the 5K run, scheduled for April 2, 2011, will go towards the Women for Women International Congo program which assists women in learning to read and other skills that will enable them to care for themselves and their children. Bonnie and Ami not members of Women for Women International’s staff, nor Run for Congo Women. They say, "We’re just two adoptive moms who love our daughters so much that we would like to give back to Congo in the best way we know how.
"Women for Women International (WfWI) officially began operations in the DRC in 2004. Currently, there are 9,324 women actively participating in WfWI’s comprehensive year-long program and more than 31,000 women have been served since program inception. Recent graduates of the program report significant improvements in their lives. In 2008, 86% of the participants reported having improved their economic situation, 88% of women expressed increased self-confidence, and 83% reported having a greater knowledge of their rights.
Those interested in joining in the inaugural run/walk event at Eagle Creek Park, can register at active.com. Although all participation is welcomed, those who do not want to run, walk, dance, or roll for 3.1 miles can still help with fundraising. Businesses wishing to sponsor this event, can contact Ami for further details. MLJ staff enjoyed the run in Lincoln Park, and we are looking forward to the run in Indy. We are proud of Bonnie and Ami and their continued involvement in their daughters’ country of origin.