If your kids are anything like mine they like to run, jump, climb and play HARD. We have sports equipment for nearly every sport (even lacrosse!), bikes, roller blades, pogo sticks, skateboards, hula hoops, a swing set, exercise balls and a gymnastics mat, and sometimes that’s still not enough to keep my kids busy and active, especially on rainy days! I wish I had a big enough house to have a gym with a zip line, swings, a trampoline and more, but I’m a social worker, so my house is not big enough for all of that! 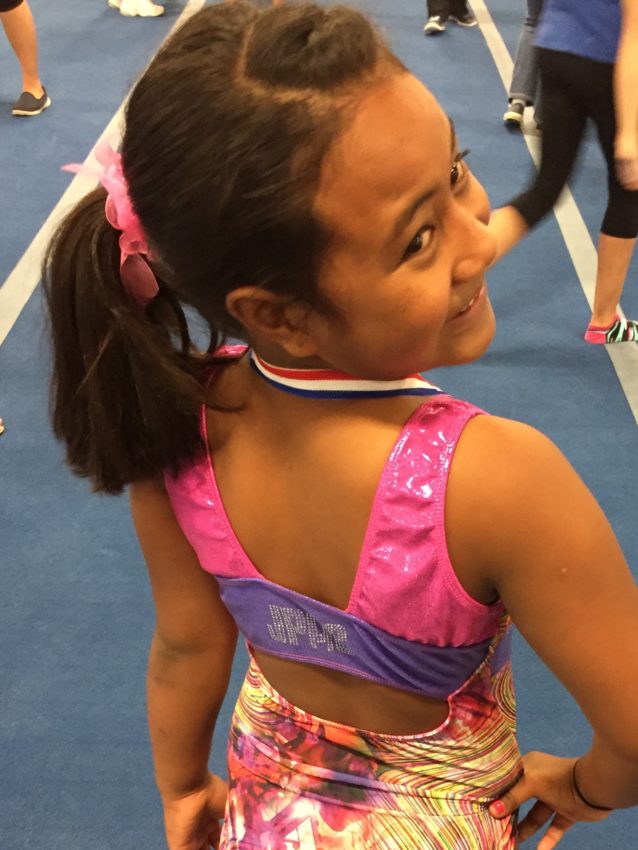 We used to attend weekly occupational therapy sessions for my child to work on sensory integration, and at the facility, they had a gym with a crash pit, tunnels, scooter boards, slides, a rope ladder, mats, trampolines, exercise balls, hula hoops, tire swing, carpet swing, lycra swing, and carabiners on the ceiling to hang more swings. This was one therapy session that was not dreaded! Actually, all of my kids liked to go to this appointment, because at the end of the session the occupational therapist would allow them all to swing and jump into the ball pit. We no longer need to go to occupational therapy, but my kids would still enjoy going to a place where they could play freely in a similar environment.

The other day I received an email from the manager at We Rock the Spectrum Kid’s Gym that just opened up in our area. She explained that it was a “sensory gym” and she was contacting me because she has a friend, who has worked in international adoption, who informed her that internationally adopted children sometimes have sensory processing issues. She stated that she thought their facility and the environment would be helpful for our families. Her friend was correct that children who were adopted internationally have a higher risk for having sensory processing issues, and children who lived in an orphanage have an even higher risk. Factors that contribute to sensory issues include premature birth, birth trauma, low birth weight, malnutrition, lack of stimulation and social interactions, and exposure to heavy metals. For children adopted internationally, sensory issues can make transitioning to a new family and a new culture even harder.

There are varying degrees of sensory issues. On one end of the continuum are those who are overly sensitive to stimuli such as touch, movement, sights, sounds, and taste. A sensory sensitive child may exhibit behaviors such as irritability to touch, or may be very particular about the clothes he wears. For example, he may frequently ask for tags to be removed from clothes and refuse to wear certain clothes because they are “itchy.” Daily grooming routines such as hair brushing or bathing may also cause frequent meltdowns. Sensory sensitive children may tend to keep to themselves and may not like to explore their environment. Crowds and noisy places may also cause a child to become quickly overstimulated, resulting in meltdowns.

On the other end of the continuum are the sensory seekers. These children need constant movement, crave stimulation, talk excessively, have difficulty sleeping, trouble focusing, chew or lick inedible objects, enjoy spinning, crashing, swinging, play rough, seek messy play, enjoy visual stimuli, like loud noises, and will make noise for no reason. Sensory seekers have poor motor control and body awareness, causing them to frequently fall down or bump into others and objects. This is the child who touches everything, is very fidgety and can’t sit still. Sensory seekers may be more impulsive and hyperactive and may have been diagnosed, either correctly or mistakenly, with ADHD.

My children definitely fall on the sensory seeking end of the continuum! To support our children, we incorporate sensory activities throughout the day, providing them with the appropriate sensory input that they need. Gymnastics and yoga have been particularly helpful, supporting their development of spatial awareness and body control. Their classrooms have also incorporated other strategies to help them focus, such as sitting on exercise balls, fidgets, inflatable seat cushion, sensory breaks, and exercise bands for wiggly feet.

If you suspect that your child struggles with sensory processing issues, seek help from an occupational therapist who specializes in sensory integration. It is important to have an accurate assessment completed by a specialist to determine the appropriate interventions specific to your child. The occupational therapist can develop a sensory diet which incorporates your child’s sensory needs into a daily routine.