Food and Fun in Nicaragua

When I travel, even for a short weekend getaway, I like to pack lots of snacks. You never know when you will be hungry, and what will be available. My husband says I go a little overboard, which may be true, but I don’t hear him complaining when he is hungry and I pull out the snack bag with a variety of options for him! A few days before my trip to Nicaragua, I made the mistake of shopping for travel snacks before I had eaten dinner. Many poor choices and $50 later, I left Walmart with my bag of candy, chips and a few healthy snacks. In my defense, my daughter was going on the trip with me, so I had to pack food for two. One of my favorite travel snacks are KIND bars. They have healthy options that travel well and don’t end up smashed into little pieces. Cashews, almonds, pistachios and other nut mixes and trail mix are also at the top of my list. You must be careful with chocolate as an ingredient in your snacks, so you don’t end up with a melty mess. I put my trail mix in a plastic container and don’t have any issues with this.

While it is nice to have snacks available on travel days, I also pack extras in case I don’t like the food options when I am traveling. Thankfully, in Nicaragua the food was great, and I didn’t have to resort to my processed snacks. My favorite thing was the fresh fruit; watermelon, honeydew, cantaloupe, mangoes, bananas, grapes and the best pineapple I have ever had! We had fresh fruit with every meal. Families traveling should be careful, however, when sampling native grown fruit. Typically, you should be cautious of eating anything that does not have a peel-able outside skin (such as a banana or orange) and only eat fruit that is washed with filtered water if it doesn’t have a peel-able skin. This helps prevent illnesses caused by intestinal bacterial.

The abundance of fresh fruit was perfect for smoothies, which were available at many of the restaurants we visited. A lot of the foods served are similar to what we have in the U.S with just a little Nicaraguan twist. Pizza, nachos, pasta, hamburgers, and steaks were just some of the common items on the menu. Breakfast was usually eggs, bacon or ham, pancakes and fresh fruit. The other breakfast items that aren’t common in the U.S., but are served in many places, are beans and rice.

My other favorite food in Nicaragua was the fresh sushi. If you are not a sushi fan, this will not appeal to you, but trust me, it is worth a try! We had the opportunity to go on a deep-sea fishing excursion where the fishing guides made sushi on the boat with fresh tuna that we’d just reeled in from the ocean.  Be wary here as well though, if you are unsure of the source and age of the sushi!

There are plenty of things to do in Nicaragua. One thing I have always wanted to try, and finally got to check off my bucket list, is horseback riding on the beach. We had an overcast afternoon so it wasn’t too hot, but I suggest going in the morning or late afternoon and avoid the harsh afternoon sun.  We were scheduled to do a two-hour ride on the beach, but I asked the guide to cut it down to an hour, and am glad I did. Two hours may be good for some people, but we had two six-year old boys with us, and they held up better with a shortened outing. 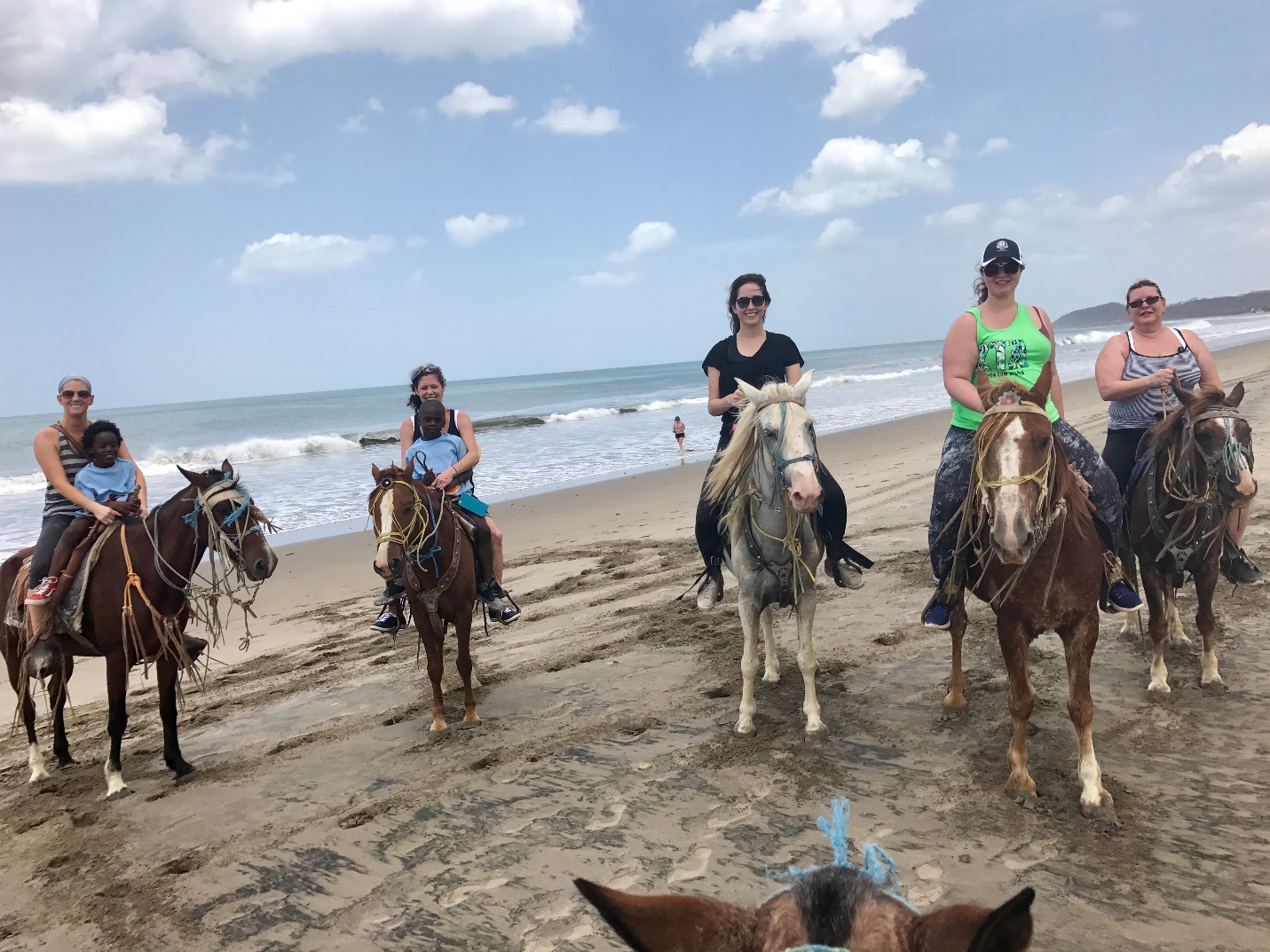 The beach where we rode horses is also a popular surfing destination. In certain parts of Nicaragua, the offshore winds make it possible to surf from sunrise to sunset, which is normally not possible in other locations. There is limited information about surfing in Nicaragua, so it has not drawn the same level of worldwide attention as Mexico or Costa Rica, but that means the beaches are less crowded, and as a result, more enjoyable.

Nicaragua is sometimes called “the country of Lakes and Volcanoes”.  A line of volcanoes run from north to south throughout the country, and there are many lakes and lagoons in Nicaragua . Some volcanoes are active, while others are dormant. Some have huge smoking craters where others were blown away in violent eruptions many years ago and all that remains is a serene crater lake.  Volcanoes are tourist destinations and fascinating to tour. We had the opportunity to visit the Masaya Volcano. This is an active volcano near Granada. The Masaya is the most accessible volcano in Nicaragua. Since the volcano is active, they limit your stay to five minutes. When arriving, there was a park employee monitoring the parking area near the volcano. This person ensured that each vehicle backed into the parking space and if they did not comply he would blow his whistle and make them move their car. I imagine this was in case the volcano erupted, and we had to make a fast getaway! 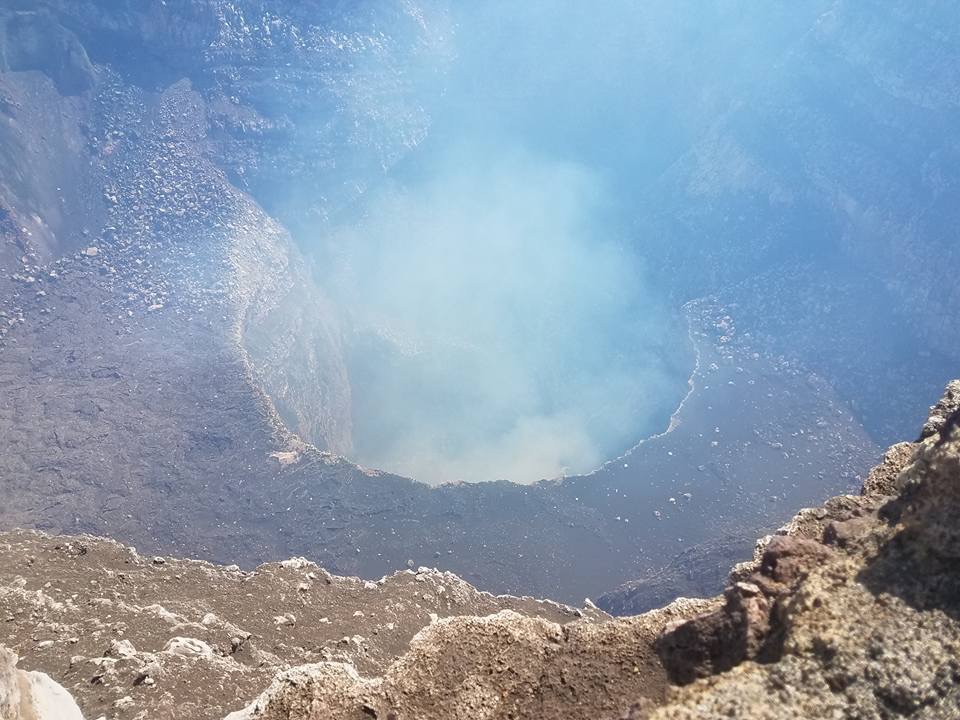 There are many great options for adventurous travelers. You can swim in crater lakes, climb active and dormant volcanoes, or walk through forested slopes. These are just a few of the things to explore and do while in Nicaragua.

As in any new country that you travel to, tasting new foods and exploring new activities can give you a new understanding of a country’s culture. Nicaragua provides great options for new experiences in both food and fun!