How to Handle Your Adoptive Child’s Indiscriminate Affection 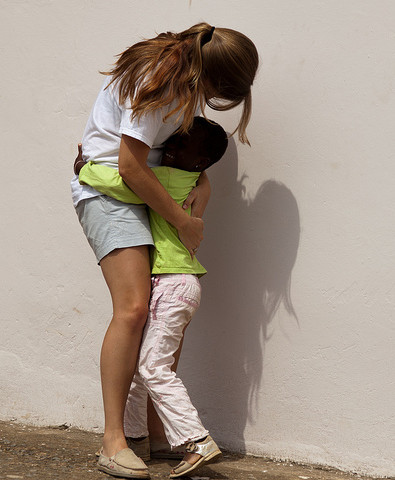 Adoptive parents sometimes struggle with their adoptive child acting too familiar or even affectionate with strangers. While many children who have a secure attachment have a good sense of boundaries and take social cues from their parents, children raised in institutions may have no sense of personal space and show affection indiscriminately. Indiscriminate affection describes the behavior of a child who shows affection toward or charms anyone and everyone. This is a survival technique learned in an institution used to gain the attention and affection of adults, which was established from not having a stable, consistent and affectionate caregiver to show them what healthy attachment looks like. In an institution indiscriminate behavior works and is also encouraged. When a child is moved from an institution into a family love and trust between an adoptive parent and child does not necessarily happen instantaneously and developing a trusting and attached relationship takes time.

Unfortunately, indiscriminate affection can be a babysitter’s dream and a parent’s nightmare. This is made even more difficult by the fact that when out and about in public many adults tend to encourage this behavior because who doesn’t want to be loved and charmed by an adorable child, it’s flattering. For most people when they walk up to someone if they’re too close they will feel an invisible force stopping them and warn them that they are invading someone else’s personal space, but for many children raised in an institution they won’t feel that invisible force and the concept of personal space will need to be taught to them.

It may be helpful to demonstrate how close is appropriate with strangers and practice asking for permission to hug and invade personal space. You can use a hula hoop to demonstrate personal space and explain that if he wants to invade that space he needs to ask for permission, for example, “can I have a hug,” or “can I sit on your lap.” You may want to distinguish that for immediate family he doesn’t need to ask but for anyone else he has to ask. Practice by asking him, “when you see a stranger, what should you do?” and role play and make it fun. You can also use repetitive simple reminders in public such as, “did you ask permission to give them a hug?”  You can also ask him, “When is it ok to give others hugs” and he can learn to respond, “when I say it’s ok and when they say it’s ok,” this will also teach him that it’s not ok for other people to invade his personal space either.

All of these things will take time practicing and will need lots of reminders every time he invades someone else’s personal space. You will need to change the wording to fit the situation and make it easy for your family. It also may be helpful to limit your child’s interaction with others and go back to square one and work on establishing a strong parent/child attachment relationship.

It is important to be able to recognize indiscriminate affection and other attachment issues and know when to seek help. For parents whose children just joined their family and are experiencing indiscriminate affection understand that this is something that may go away in time. However for those families who continue to see this with your children after a year, it may be time to see a counselor who has experience with adoption and attachment issues.

For more information on our Adoption Services, please contact us.