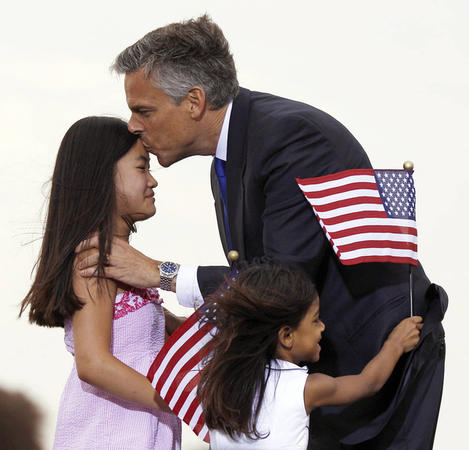 The 2012 Presidential election is right around the corner. Soon we will be bombarded with ads, both positive and negative, and who really knows what to believe. While we fully expect negative ads to take place and we tend to take them all with stride and with a grain of salt, some just really cross the line. For most folks, crossing the line includes negative slurs against the children of candidates. But every election seems to include some advertisement pointing the finger at a candidate’s child or family members. And it always repulses me to think that we need to stoop to these levels. Like many people, I pay attention to politics, but am in no way an expert and tend to particularly prick up my ears when I hear one of the candidates mention an issue of importance to me. The recent skirmish between Republican candidate Ron Paul and Republican candidate Jon Huntsman has certainly made my ears stick straight up.

News channels all over the country are talking about a pro Ron Paul video ad that questions whether Jon Huntsman can have “American values” The video, entitled "Jon Huntsman’s Values", was uploaded to YouTube on Thursday, January 5, 2012. It intersperses clips of Huntsman speaking Chinese (he has lived in China four times) with images of him with his daughter Gracie Mei, who he adopted from a Chinese orphanage in 1999. The footage is set to east Asian music, and describes Huntsman as "the Manchurian candidate". In the novel and film of the same name, the son of a prominent US political family is brainwashed into being an assassin for China’s Communist Party. "Weak on China? Wonder why?" the video asks, before showing a clip of Huntsman with Gracie Mei. His daughter Asha Bharati, adopted from India in 2009, is also shown in the video.

Hundreds of newspapers and other news organizations have publicly denounced the ad and called it “racist” and “stupid” and “clearly objectionable”. Other political figures such as John McCain have vehemently stated their objections as well.

To be fair, Ron Paul has come out and stated that he had nothing to do with the attack ad and did call it “disgusting”. The ad was published by a group backing Ron Paul, but again, Paul has yet to sanction the group. But the ad and those words are still out there and we are still talking about it. What sort of collateral damage can come from a small YouTube political advertisement like this? At the very least, it substantiates the idea that we can win at all costs by lying. But more importantly, it certainly perpetuates a culture of racism and ethnocentrism that those involved in international adoption have been trying to eradicate. As adults, we may be able to filter out what we deem as inappropriate or not in line with our values, but children don’t have such a refined filter. International adoptees such as Huntsman’s children (ages 12 and 7) will see and feel the fallout from this for a long time to come. Children that may already look different than their families often need extra reassurance that they “belong” or are truly “American.” And after all, isn’t that one of the reason we so value living in the United States? Because we can speak different languages, have a variety of skin tones and eye colors and still be American. But publicity such as this ad sets the international adoption field back years and is counterproductive to the idea that “American values” have nothing to do with skin or eye color.

Huntsman, himself, illustrated this position when he said on Friday January 6, 2012, that his adopted children are a "daily reminder that there are a lot of kids in this world who do not have the breaks that we do and who face a very, very uncertain future." He went on to say that both of his girls were abandoned as infants and adopted from orphanages, but “now these two girls are on the United States Presidential campaign trail. How cool is that?” Yep, how cool is that?