There are so many adoption advocates out there speaking on behalf of children in need throughout the world. Some of those advocates are everyday people and some are celebrities that have their own platforms that allow their voices to be heard.  One such celebrity advocate who has been touched by adoption is, Lindsay Price. Lindsay Price is well known for playing roles on Lipstick Jungle, Beverly Hills 90210, as well as on the soaps All My Children and The Bold and the Beautiful and she has worked to advocate for children in need of homes and adoption.

Lindsay Price’s mother was a South Korean orphan during the Korean war, who was abandoned by her birth mother. Both Lindsay’s mother and her mother’s brother were adopted by the American couple. Lindsay’s grandparents were able give her mother a chance to be loved, grow up in a family and to offer her a future. Lindsay is an advocate for adoption because she has seen firsthand that it changes the lives of children in need of families. It is an opportunity for a child to have a family, a future and to know that they are loved.

Lindsay donates her time and efforts to work with adoptive families to help them raise money towards their adoption fees. She met Hank Fortener, who is the founder and CEO of Adopt Together, and told him that whatever she can do to help his foundation she is in!

Adopt Together is the largest crowdfunding organization that helps families who are trying to adopt by raising money through charitable donations. There are many people in the world that want to be parents but cannot due to their own reasons or due to lack of financial resources. Lindsay realizes now having had her own children how important it is to show children that they are loved, cared for and notable. Lindsay’s husband, Chef Curtis Stone, also works hand in hand with Adopt Together as partners for his campaign called #Commit2One. The organization holds an annual fundraising gala called Baby Ball that is an annual celebration of World Adoption Day. Baby Ball consists of live music, artwork, games and activities, and a silent auction. This celebration takes place every year in November in Los Angeles. For more information about this organization, go to www.adopttogether.org

Adoption Bridge is also a crowdfunding site that assists families with the financial obstacles of adoption. With their partner agencies and generous donors, they can site assists prospective adoptive families with fundraising and guidance through the adoption journey. Adoption Bridge can provide financial support by having 97% of their donations going directly towards paying adoption fees. If you would like more information about Adoption Bridge, please https://adoptionbridge.org/

As Lindsay Price so eloquently said, “Adoption is giving someone a chance. It’s giving someone love.”  Interested in international adoption? Please contact info@mljadoptions.com. 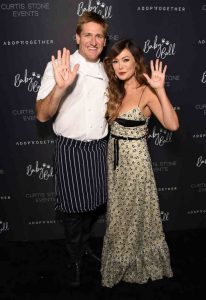