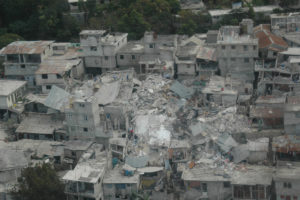 It’s hard to believe that it has been seven-plus years since Haiti’s devastating earthquake. But it has; on January 12, 2010, a catastrophic earthquake with a magnitude of 7.0 struck 25 kilometers outside of Haiti’s capital city of Port Au Prince. An estimated 100,000 people died, and 3,000,000 more were affected. Haiti was already the poorest country in the Western hemisphere, and the aftermath of the earthquake was devastating. Of those left alive, many were homeless, without clean water, food or shelter. The conditions were miserable and unsanitary, leading later to an outbreak of cholera. Many Haitian children lost their parents, and sometimes their whole families, in the earthquake. The world watched the images of those suffering, and the images of children were the hardest to bear.

What I remember vividly during the aftermath of this earthquake was the willingness, of both nations and individuals, to help, and the prospective adoptive parents wanting to adopt children from Haiti who had lost their parents in this catastrophe. This willingness to help was the result of nonstop news and media coverage that called attention to the horrendous living conditions and large numbers of Haitian orphans. As human beings, we have an instinct to reach out and help when we see others in need, particularly children. It is fantastic to witness when people are willing to step up, lend a hand, and even to bring a child into their home, in times of extreme crisis.

Fast forward to today, and we have seen many changes in both Haiti and adoption, as well as the public’s willingness to step forward and help. With news coverage no longer shining a spotlight on Haiti, people naturally tend to forget about the continuing need, but it is still there. Haiti is still the poorest country in the Western Hemisphere, and Haitian children are still without parents and in need of forever families.

Haiti is still recovering from the massive quake which devastated the country seven years ago. If you visit today, you will still see Haitians who lost everything in the quake living in tent cities. Yes, some improvements have been made, but there are many improvements needed. With regards to international adoption, Haiti has now become signatory to The Hague Convention on Protection of Children and Co-operation in Respect of Intercountry Adoption, better known as The Hague Adoption Convention. Adopting the convention means that Haiti’s adoption process has changed, with new protections in place for adoptive parents that were not there previously.

Perhaps the media attention has stopped, but the poverty in Haiti is still pervasive, and there are still many, many children in need of loving homes. And yes, some of these children, now older, are still in creches (orphanages) because of the earthquake that occurred in 2010.

As human beings, we all step up to the plate during times of crisis and great catastrophe when we see our fellow man suffering. Let’s continue this willingness to help well beyond these moments in time, such as the quake of 2010. There is still a need in Haiti for adoptive parents. MLJ Adoptions has openings in its Haiti program for those willing to open their hearts and homes to a child in need.