Why is There a Need for Adoption in Mexico? 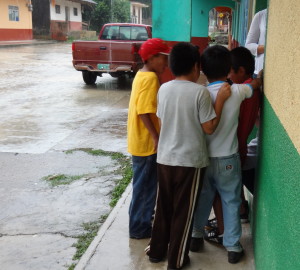 From lush tropical areas to desert regions, mountains to beaches, the bustling of Mexico City to the indigenous Indian villages…. Mexico is a beautiful country with many contrasts. In numerous larger cities Mexico resembles parts of Los Angeles, but up the mountains far away from the city lays great poverty. Small shacks, wood and dirt floors, animals kept inside to keep from wandering away or being stolen, children with no shoes, families that literally walk miles for fresh water, and have very little opportunity to get out of the poverty they in which they are entrenched. These families sacrifice their sons and husbands to the United States to become immigrant workers, in hopes of sending money back to help support their family. Young girls and boys with dreams of going to the bigger cities to find a better life, only to fall in to the same cycle of poverty they were trying to escape.

In Mexico there is a strong sense of family and oftentimes, relatives will help care for the children if the parents are unable to do so. In fact, grandparent rights are as strong as parental rights. Children who are declared adoptable must have parental and grandparent rights terminated. Even with the strong bonds of family, poverty can sometimes make the situation impossible in caring for a family.

According to Wikipedia: “poverty in Mexico is measured under parameters such as nutrition, clean water, shelter, education, health care, social security, quality and basic services in the household, income and social cohesion as defined by social development laws in the country.  It is divided in two categories: Moderate poverty and Extreme poverty. 42% of Mexico’s population lives below the national poverty line.”

As you may have concluded, the driving force behind the need for adoption in Mexico is poverty. While Mexican families will consider adopting infants and younger children, as it is around the world, there is still a great need for older child adoption. Most children in Mexico that are adoptable are six years and older, part of a sibling group, or a special needs child. They are typically of indigenous descent.

As an adoptive mother of three older children (adopted at 6, 7 and 11years old) I have seen firsthand the highs and lows and what it means to older children to find the security and sense of belonging that a family can provide.  I would encourage families to consider making a difference in the lives of one of the many older children that are waiting. My daughter Katelyn was recently interviewed for a blog on older children said it best,

“They don’t have much time left. They want to be adopted just as much, actually MORE, than the younger children who aren’t aware of their current situation. I wish more people would be open to adopting older children like me.”

For more information on adoption from Mexico, please contact us.