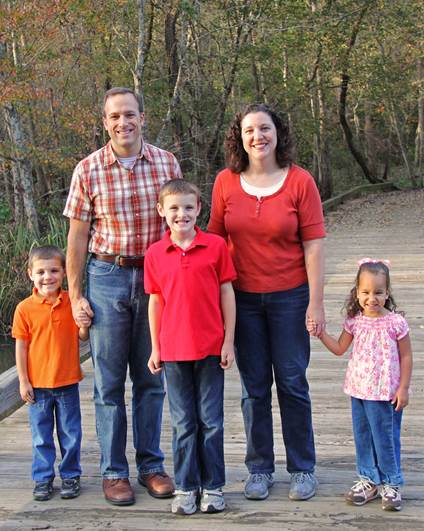 Please introduce your family.
We are Joel and Amy Nichols from Lawrenceville, Georgia.

What led you to international adoption?
Joel’s younger sister is adopted from Korea and we have always wanted to adopt internationally as well.

What country did you adopt from and why did you choose that country?
At our initial meeting with MLJ, we discussed the different countries they worked with. When we saw pictures of the children from Bulgaria, we instantly fell in love.

Why did you choose to work with MLJ Adoptions through your international adoption process?
We were referred to MLJ by some friends of ours who had adopted two boys with MLJ from Ukraine. They since have also adopted 3 girls from Bulgaria.

How long did the adoption take you?
We started gathering our home study documents in May 2011 and had the home study completed in August. Our I-800 form came in March 2012. It was March 2013 when we received our referral and traveled the first time in April. In September, we returned to Bulgaria and brought out daughter home.

How has international adoption been different than you expected?
It was a much longer process than we expected. Several times we had to quickly get documents submitted, then we would wait months, not knowing where we were in the process. We were also surprised how often we had to get our fingerprints taken. Overall, they were taken 9 times.

How has international adoption impacted your family?
Our extended family has been very supportive of our adoption and it has opened up new avenues of conversation with other couples considering adoption.

What was adjustment like for your family?
Sometimes the adjustment was like a roller coaster. Some weeks were easy while other weeks there was nothing that could have prepared us for the unique challenges presented. Nine months later we have a daughter who fits in well in our family. She loves her brothers and they love and adore her.

What do you wish you could tell other families that are adopting or considering international adoption?
Getting documents through the US government takes a lot longer than we anticipated. Develop a good support system with other adoptive parents as you will need people who have been or are going through the same thing.

Is there a special story about your adoption that you would like to share?
When we arrived at the orphanage the first time, the director kept saying “the hair.” Once we met our daughter we realized her hair looks just like Amy’s does. After coming home, several people have commented on how much our daughter looks like Amy because of the curly hair.