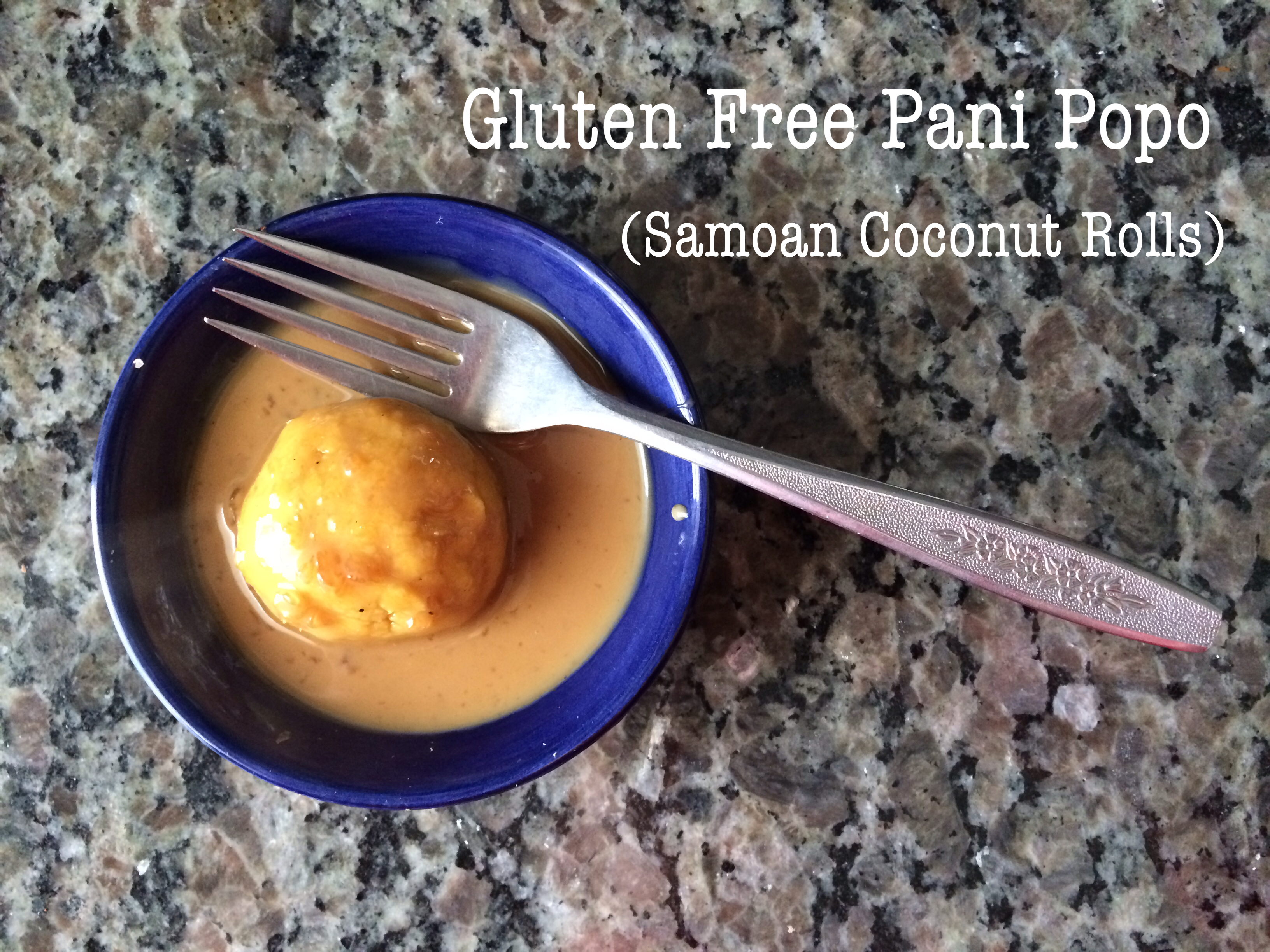 I started preparing Samoan dishes several months before I went gluten free. I immediately fell in love with the Pani Popo recipe at The Polynesian Kitchen. It was comforting, easy, and you cannot go wrong with coconut milk and sugar. It has taken over a year for me to find a gluten free version that I find acceptable. I tried the ready-made (gluten-free) rolls like The Polynesian Kitchen had suggested, but I was not pleased enough with the results to serve to my son.
Today, when the rolls came out of the oven, I was so excited to surprise my son that I had the camera ready as he tried it for the first time, but I didn’t tell him what it was (intended to be). He had an immediate memory of the flavor and expressed his excitement with wide eyes, a thumbs up, and much praise. He was eager to share with his cousin and we quickly devoured the entire batch. Even my brother who is pretty skeptical about coconut enjoyed it. We made more the next day for him to share with his friend from Samoa and her adoptive family. I should have saved at least one of the rolls to find out how well they freeze, but they just don’t last long. If I could make a big batch of these rolls, it would be great to serve to him on more than special occasions. At the very least, I would like to make this a tradition for Christmas Eve morning, maybe with some bacon.
My bread recipe is the Paleo Dinner Rolls recipe at Paleo Spirit. I liked that it used coconut flour which we have found to create soft, fluffy baked goods. I did have to add 2-3 extra tablespoons of coconut flour to get the dough to the right consistency. I used an extra large egg, but the middle of the rolls could have been a bit fluffier. I also tried a batch with coconut oil rather than olive oil which I think gave them a better flavor, especially for this dish. I ended up with more than the 10 rolls predicted (12-15 per batch), but perhaps I could make them larger next time. Don’t be intimidated by the “paleo” ingredients. You can find tapioca flour and coconut flour at Amazon. I followed the directions exactly, so I didn’t cook the rolls in the sauce; however, they do not change size much so next time I think I will cook them in a pan and cook them in the coconut milk sauce.
The sauce for Pani Popo is pretty standard and I stuck with directions at The Polynesian Kitchen except I didn’t add as much water, hoping for a thicker sauce. I also utilized organic palm coconut sugar for a healthier option that also kept with the coconut theme. It does give the sauce a darker color though.
Whether your family is gluten free or not, I bet you will enjoy this recipe. The dinner roll recipe is quite simple even if you have to order the flours from Amazon. This Samoan recipe is sure to warm your heart just like it did my sons. His smile only serves as encouragement to make it more often, even if it is mostly a treat.