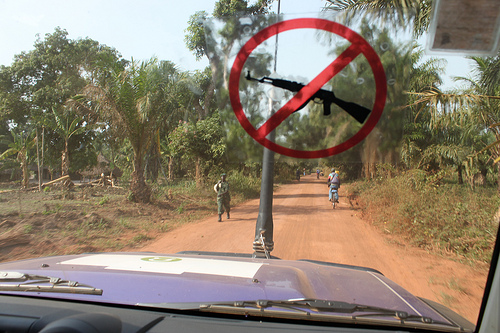 On Tuesday, the UN peacekeeping mission in the Democratic Republic of Congo of approximately 19,000, issued an ultimatum to some 30 rebel forces of the unstable eastern area of DRC. Rebels were told that they had a deadline of Thursday at 4:00pm to disarm, or U.N. troops would disarm by force.

According to a Christian Aid press release, “Any individual who is not a member of the national security forces and carries a firearm in the (security) zone will be disarmed by U.N. forces as an imminent threat to civilians.” This is the first time the U.N. has said it will use troops to secure the area around the city of Goma.

This deadline has now come and gone in the Democratic Republic of Congo. And exactly what is currently happening in the region is unknown. It is not clear how many rebel fighters have disarmed. It now appears that the M23 rebel group may not heed the warning and disarm. “‘We consider that this measure does not concern us,’ said M23 chief Bertrand Bisimwa. He said his fighters were not in the region south of Goma where much fighting has taken place recently.”

Now that the deadline has passed, the United Nations has not indicated that military action (other than paroling the area) has begun or the future plan for action. U.N. peacekeeping spokesman Kieran Dwyer, stated, “MONUSCO peacekeepers are patrolling across the security zone in support of the Congolese armed forces.” It does not appear that force is currently being used by the UN peacekeeping mission.

Congo sometimes appears to be lacking in humanitarian aid, as compared with similarly situated countries. The U.N.’s involvement here appears to be a step in the right direction for the world beginning to watch and aid Congo. The city of Goma has been at the center of conflict in the region over this past year between the Congolese government and the M23 rebel groups. This conflict is said to have displaced over 100,000. The fact that the U.N. is taking steps to become involved and giving Congo the attention it deserves is very positive for the country. We hope that such attention will continue benefit the Congolese people, and specifically the estimated 4-5 million orphans in the country.

Unfortunately, in the past, the people of Congo do not seem to get the attention that they deserve from aid organizations or the US government. We have also seen this with the slowing of adoption investigations and processing by the US government as it relates to international adoption of children from Congo. These delays causes adopted children to wait months longer than is necessary in a country that is wrought in violence and poverty. We see that the U.N. becoming involved in this matter as a good sign that the world is watching the Democratic Republic of Congo and cares about the future of its people. We hope that this attention will also be directed to the vulnerable orphans of Congo.

Check back here on the blog and our Facebook page to see more about MLJ Adoptions, Inc.’s efforts to advocate for the orphaned children in Congo. Help us give hope to DRC adoptions; please click here to see how you can help.