More Samoans in the NFL

With NFL season underway, we are taking a look at a few great Samoan football players! American football is extremely popular on this tropical island, and the NFL sees numerous players from Samoa.

Lofa Tatupu has Samoan blood running through his veins and football talent inscribed in his genes. His father Mosi Tatupu was born in American Samoa and played for the New York Patriots from 1978-1990 as a running back. Mosi had the privilege of coaching his son as quarterback during his high school football career. Lofa’s father passed away in February 2010 at the young age of 54.

Lofa was born in San Diego, California and then raised in Plainville, Massachusetts. As a freshman in college he attended University of Maine, and soon transferred to the University of Southern California where he majored in sociology. In the 2005 NFL draft he was selected to play for the Seattle Seahawks. After three successful years on the team, the Seahawks extended his contract for another six years – a deal worth nearly $42 million dollar. This pricey contract made Lofa one of the six highest paid linebackers in the league. Lofa played in three consecutive Pro Bowls in 2005, 2006, and 2007.

After being released by the Seahawks, Lofa signed a two year contract with the Atlanta Falcons in early 2012. Four months into his contract, he tore a pectoral muscle and was out for the season. The Falcons terminated his contract, and Lofa has been a free agent since.

Shaun Nua was born in Pago Pago, American Samoa where his defensive football career first began. He attended Tafuna High School and received All-League Honors his senior year for excelling as a defensive end. Nua suited up in his Cougar jersey to play college football at Brigham Young University after transferring from a junior college in Arizona.

In 2005, Nua was drafted in the seventh round by the Pittsburgh Steelers. He played only three seasons with the Steelers, but it was long enough to add a Super Bowl Championship to his resume. In 2007 he was drafted by the Buffalo Bills where he played his last season.

Nua has since been focusing on his coaching career. He coached at his former college, BYU, and led the Cougars to rank 13th in the nation for defense. Nua has also assisted in coaching the defensive line at the Naval Academy. 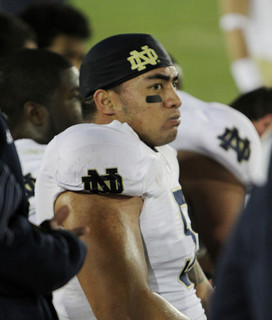 Manti Te’o was born in Hawaii but is of Samoan ancestry. Like many Samoan players before him, Te’o drew in national scouts throughout his high school football career. He was named Gatorade Player of the Year as a junior in 2007, and again his senior year. An astounding number of tackles, sacks, forced fumbles, and rushed yards drew in offers from over 30 college programs. He was regarded as one of the most highly recruited athletes in all of Hawaii’s history.

A graduate of Notre Dame University, this talented linebacker is also one of the most decorated college football players of all time. He was drafted by the San Diego Chargers in 2013 during the second round of picks, and signed on for a four year contract with the team.

Though Te’o has seen success in his football career thus far, his personal life took quite a hit in the media earlier this year. Te’o was the victim of a crude hoax. After believing his online relationship had ended with the death of his girlfriend, it was revealed that the existence and death of his girlfriend had been faked – the woman never existed. Former NFL player Tuiasosopo confessed on January 16 that he was behind the prank. Shortly after, Te’o appeared on Katie Couric’s show revealing voice mails he received from what he thought to be his girlfriend, and later on Dr. Phil “Tuiasosopo confessed to the hoax and to pretending to be Kekua; describing himself as “recovering from homosexuality”, he admitted to falling in love with Te’o and using the Kekua identity as an escape.