With the NFL pre-season right around the corner we’ve once again noticed just how many Samoans have made it into the National Football League. Below, we’ve highlighted just three of the numerous players from Samoa. This is a great way to celebrate Samoan culture with your child.

At 26 years old, jersey #50 for the Oakland Raiders currently belongs to Kaluka Maiava, an offensive linebacker and Hawaii native. Kaluka had many famous athletes to look up to growing up, including those within his own family. His grandfather was former professional wrestler Neff Maiava, and his uncle Dwayne Johnson, also known as “The Rock” was a WWE super star. Some other wrestlers within his family are the “Wild Samoans” Afa and Sika Anoai, along with Afa’s sons. His sons Samula Anoai, Larry Anoai, and Afa Anoai Jr, go by wrestling names The Great Samu, LA Smooth, and Afa Jr respectively.

Kaluka was a young all-star athlete participating in soccer, boxing, and football. Throughout his years in high school he received many athletic awards – among those were: Gatorade Hawaii Player of the Year, Super Prep All-American, Super Prep All-Farwest, Honolulu Advertiser All-State and many more!

After graduating high school, he continued playing football at University of Southern California, where he majored in sociology. Within all four years as a linebacker for USC, Kaluka only missed one game during his college career. He was then drafted by the Cleveland Browns in the fourth round of the 2009 NFL Draft, and shortly after was drafted by Oakland.

Jonathan Fanene is native to Pago Pago, American Samoa and was born into a very large family – he has five sisters and six brothers! He grew up alongside Samoan friend Domata Peko, a defensive line tackle for the Cincinnati Bengals. Fanene majored in sociology at the University of Utah. He was recruited by the Bengals in the seventh round of the 2005 NFL draft and was with the team until the end of the 2011 season. In 2012, Fanene signed a contract with the New England Patriots, but was released from his contract due to “failure to disclose physical condition” from a knee injury. Jonathan, a defensive end, is now a free agent.

He is proud to be from Samoa, and wants to be an example to the kids back in his home country. In a quote from the Patriots Report on ESPN, Jonathan explained his beliefs on why Samoa has so many fantastic historic football players. “Because they want it more.” Fanene proclaimed. “Plus (people think that since) it is a small island that we don’t know football. When I was in high school I really didn’t think I was going to be in the NFL until I graduated, and I just had the chance to come out here and continue on and to be blessed to play football. It was a blessing.”

Jonathan currently lives in Dayton, Kentucky with his Lorelei and their sun Truman. 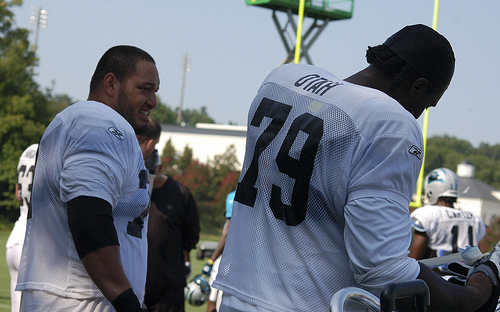 Toniu Fonoti was born in American Samoa and later moved to Hawaii with his family. At the age of 13, he started playing football as a way to channel his anger and aggression. Toniu says, “All that hatred I was feeling inside, I took it all out on the field…” and his intensity got him noticed. Toniu received many honorable awards in high school, and continued to play football in college. He majored in communication studies at the University of Nebraska before being drafted by the San Diego Chargers in 2002. He has also played for the Minnesota Vikings and the Miami Dolphins.

Toniu hasn’t played football since his last season in 2006. Someday he may follow in his father’s footsteps and be the head of his family’s village back in Samoa. Though his father lives in Hawaii, he still remains chief of the village and is confident is son will be take his place. “He has the heart to be the leader. I’m proud of him. He’s a very disciplined, selfless person. I think he could hold the title.”