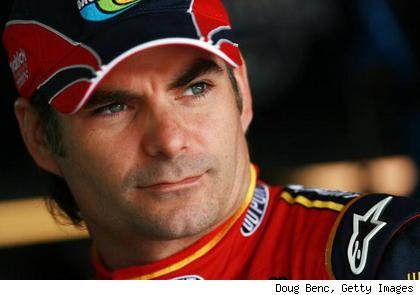 NASCAR drivers Paul Menard and Jeff Gordan provided racegoers with an exciting finish at the Brickyard 400 yesterday. Menard managed to hold off Gordan for his first NASCAR win. Despite the second place finish at the Indianapolis Motor Speedway yesterday, Gordan is first in our hearts for his off the racetrack activities. Last week, Gordan traveled to the Congo as a member of an invitation-only leadership group established by the Clinton Global Initiative. He explored villages and refugee camps in Congo. Among those joining him on the trip were actress Ashley Judd, wife of open-wheel racer Dario Franchitti, and Myron Rolle, a defensive back for the Tennessee Titans.

Gordan spoke about his experience in the Congo at the Speedway on Friday. "It was very eye-opening from the struggles that the people there are going through just to make ten cents or a dollar or $5, to the roads, the structure of the military, the government.”
He went on to share more of his impressions. “Two-year-olds walking around barefoot on the side of the road with nobody really watching them and we’re driving by at 30 mph covering them in dust. They just kind of wave at you as you go by. I saw groups of women carrying large sacks of coal and different things on their backs for hours walking to get ten dollars. Those types of things I just didn’t expect. You can’t grasp that until you’re there."
Gordon used the term "re-entry," a word humanitarians use to describe the emotions that linger after trips to the world’s poorest locations. He was there less than three days, but it was enough to feel the pain. "I feel guilty about buying a bottle of water for bucks," he said. "I mean, you look at your refrigerator and you go, oh my gosh, so much waste here.”
"You just start to look at every aspect of your life and the things that you take for granted." Gordon said the first thing he did upon return from the 28-hour each-way journey was hug his wife and their two children. "It was an experience that changed me forever," he said.
MLJ Adoptions offers one of the most successful international adoption programs in the Democratic Republic of Congo. Two Congolese children were united with their forever families today at Chicago O’Hare Airport. That brings up to a total of 33 children that MLJ Adoptions has brought home from the Congo. For more information, check out: https://mljadoptions.com/Congo.aspx.