Taking a Drive Through Haiti

Parents adopting from Haiti often ask us what it will be like when they arrive in their child’s native country. They want to know what to expect, what to prepare for and what to bring to make their trip more meaningful. One of our families actually asked if we could shoot a video while driving through a country to give them a better idea of what it would be like! While I have not done that, I will try to describe my initial trip to Haiti, and what I saw and heard on a drive through Port-au-Prince.

We have just landed, and it is hot here! The cinder block airport is functional but by no means fancy. It is small, not air-conditioned, noisy, a little dirty, and very crowded. There are armed guards at various points, but the atmosphere is surprisingly relaxed. There are long lines for the various services provided at the airport; patience is truly needed! At the exit, throngs of men crowd the doors and the outside walkway to attract your attention as they try to snag foreign customers for their taxi services. They will grab at your luggage or bags to get your business before their competitors do, so hold on tight! You soon learn that in this terribly impoverished country, the entrepreneurial spirit is alive and well.

In our car, our driver is kind, pleasant, helpful, and informative. He works with MLJ Adoptions to assist our families when they come to Haiti. Driving here is not for the faint of heart! We pass the Place Hugo Chavez outside the airport, which has lovely grounds, mosaics on the walls, brightly colored flowers, manicured lawns, and excellent landscaping. It is soon evident that this is the exception; most of the city is not well maintained. A few gas stations are near the airport and we see that gas is currently at $4 per gallon, much higher than in the US. In the distance, the mountains climb stealthily toward the sky. Houses appear to be perched precariously on the mountainsides and an abundance of green trees surround them. The view is beautiful.

Port-au-Prince is a busy place. The morning activity is relentless. Traffic on the roads is excessive due to the large number of cars, SUVs, motorcycles, and Tap Taps (pick-up trucks, vans, small makeshift buses) that carry passengers packed tightly inside, on the roof, and even hanging off the bumpers. They compete for space on the rutted and narrow winding roads. There are no lane dividers; it is every driver for himself! Two-way roads become one-way without warning, and paved roads become rocky and dusty trails up and down the mountains. Horns beep constantly and the noise can be excessive, but it is an important warning that another driver is pulling out in front of you, so you do need to pay attention. I only saw one stoplight while I was there! There are few to no driving rules, and our driver says that most people do not have licenses. Considering the speed that most people drive, there is great danger in trying to navigate this country yourself. 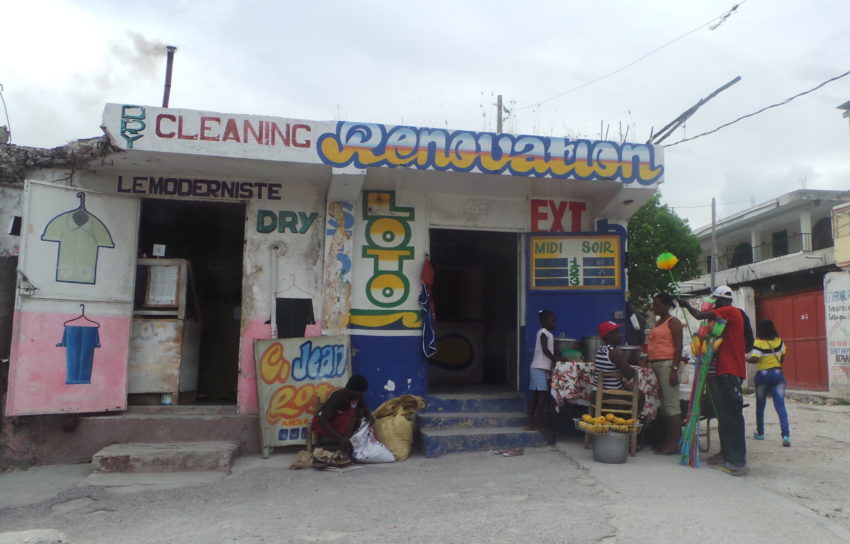 The street vendors set up early in the morning. Booth after booth along garbage-laden and dusty streets hold food, drink and basic necessities for sale. You see vegetables, fruits, breads, clothing, seafood, shoes, liquor, tires, furniture, personal care items, sugar cane, rice and flour, chickens and rabbits, crafts, and just about anything you can imagine being sold. The fortunate vendors have tattered umbrellas advertising digital phones and Perrier to shelter them from the heat of the sun; most vendors do not. You see low metal grates with fires underneath grilling corn while sterno cups heat large containers of stews, spaghetti or rice and beans. Wheelbarrows or human-pulled carts carry bottled water and flavored drinks. Children and adults converge on your car and beat on your windows to peddle water; they know you will need to stay hydrated in this heat. Women and some men carry large baskets on their heads through the city to transport the fruits, vegetables, bread, eggs, and grains. It is amazing to see them balance this heavy load for miles walking up and down the endless hills. Loto, or lottery shops, are everywhere, one after the other, as are small corrugated metal Bancs . There are many people walking around and dodging the erratic traffic. It is very chaotic! 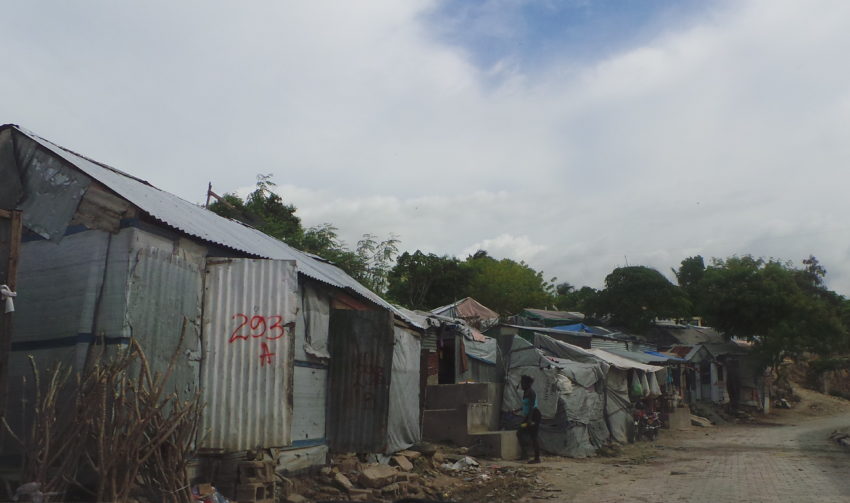 You easily notice the heavily damaged and aged infrastructure here. Buildings have been abandoned during construction, damaged due to earthquakes or hurricanes, rotted due to weather and lack of funding, and left unfinished due to the high taxes. Construction debris—lumber, bags of cement, rocks, and cement blocks– sits in piles hopefully awaiting a funding miracle for re-construction that will likely never arrive. Crowded slums or tent cities fan out along the hills and alleyways and contain decrepit metal or tarp structures which many Haitian residents call home. Hollow-eyed children play in the dirt with sticks, rocks and pieces of material that likely used to be blankets. There is no running water, poor to little sanitation, piles of endless garbage, and abject poverty everywhere. Throughout all of the streets in Port-au-Prince you see roaming animals (dogs, goats, chickens, a few cats) scavenging for food among the abundant garbage. Sometimes you see people doing that too. The crows of roosters rise above the regular noises. Occasional cows graze unnoticed in the ditches. Graffiti is everywhere but is especially noticeable due to the large cinder block and metal walls protecting each home or business. Crime is a major concern in Haiti but you seldom see police. Election signs are pasted on so many walls that you wonder how many people are actually running for office. In oddly placed parcels, you see small weed-infested gardens where surviving corn stalks, tomatoes and okra plants seem to beg Mother Nature for a little bit of rain.

A closer look at the endless walls of the city reveals shards of broken glass or curled barbed wire nailed to the top of the walls for additional protection from crime, robbery or violence. Entries and exits to businesses, churches, schools, and homes are locked with metal gates opened only by an armed guard on the property. The gates open and shut very quickly. Ironically, there is also a great deal of gorgeous vegetation, flowers and vines, which cling to the large walls, offering a rare glimpse of beauty in the surrounding neighborhood. The hibiscus is stunning!

We pass a large abandoned building that was once a public hospital. It is now closed because the government refused to pay the doctors, who finally walked out. Our driver tells us that there has been no public medical healthcare in the city for months. Physicians are still available in clinics, but you must pay them directly, which most Haitians cannot afford. 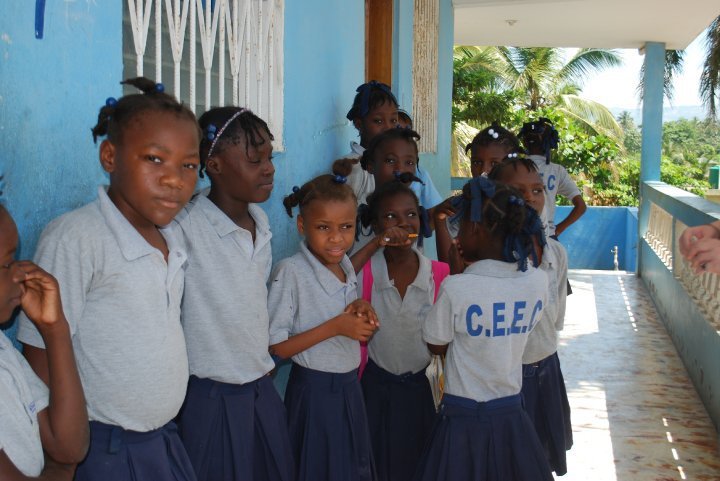 I love watching the children walk miles through the streets to and from school each day. Clad in tailored uniforms of every color, the little children march alongside their parents while the teens walk in groups, stopping occasionally to purchase sweets from one of the vendors. Chatting and laughing, they simply make you smile! Our driver tells us that education is greatly valued and parents will sacrifice their own needs to ensure that their children can attend the church-operated private schools, which offer discipline, nutritious lunches and a good education.

At night, the city comes even more alive. Pedestrians crowd the booths for street food, and vendor sales are hopping! Music is played loudly and those who are fortunate to have jobs commute home on the crowded and colorful Tap Taps with names like Bon Bagay, Fat Joe, Choopi Love, and Merci Deus. The doors to the many colorful beauty and barber shops stand open as glamorous posters and painted advertisements lure in customers. People walk home swinging dead chickens alongside, one in each hand, to prepare for the family dinner. Children can be seen playing on occasional concrete playgrounds with a few pieces of equipment and benches for parents to relax and watch over them. The streets get more crowded and people fondly greet each other with handshakes, shouts and occasional hugs. The scene becomes more of a party, but by this point we are headed to our hotel.

Our driver takes us to a section of town called Petitonville, where we enter a gated hotel complex. Beautifully landscaped with indigenous plants and flowers, the hotel is obviously geared toward the foreign traveler. Tourism is one of the businesses that Haiti depends on for income, so catering to travelers is an important job, and the staff are professional and well-trained.. The quiet and peacefulness of the hotel setting is in stark contrast to the chaos and activity of the streets of Port-au-Prince.

As I collect my thoughts about today’s travels, the word “resilience” comes quickly to mind. I am in awe of this small country’s ability to endure natural disasters, corrupt politicians, crime, and poverty. Their entrepreneurial spirit keeps them able to somewhat feed and support their families. The focus on their children’s education, in the hope of giving them a better life, is inspiring. Their persistence and will to survive is paramount. Yes, resilience is a good word to describe my first impression of Haiti. It’s amazing how a simple day’s drive though the city will impact your opinion and appreciation for these proud and resilient Haitian people! 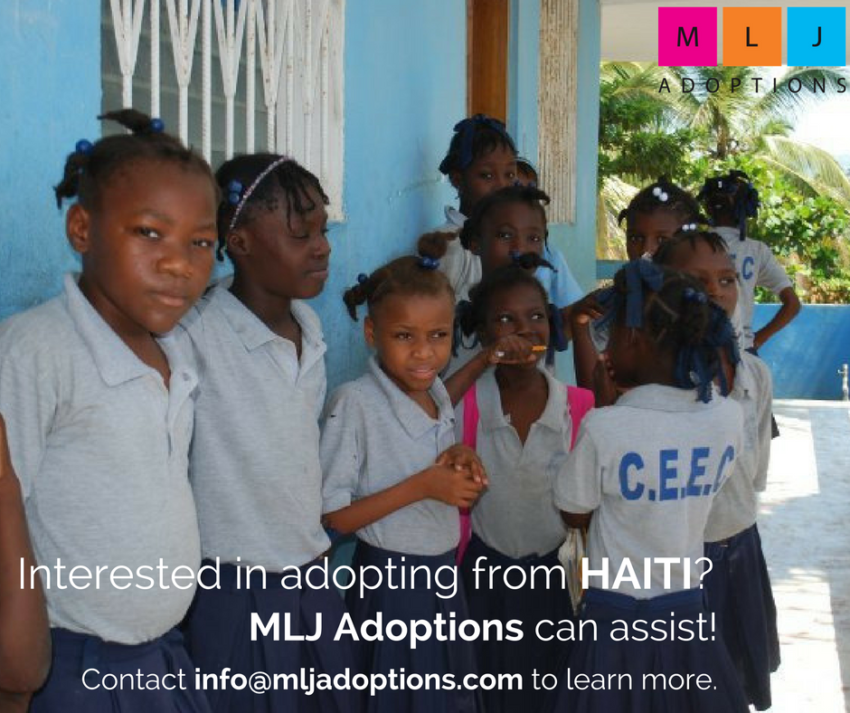