The Importance Of Choosing The Right Agency 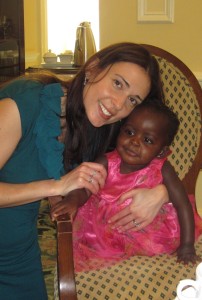 When we first began our adoption journey, we were drawn to the idea of a pilot program to expand our family, paving the way for future adoptive families. The first agency we chose was close to our home and developing a program in a country that was a perfect fit. Something didn’t feel quite right, but I suppressed those instincts, telling myself I was being overly cautious. After all, this agency’s purpose was to help children and they had placed children from other countries before, therefore they must have a plan of action and everything would be fine. After completing the dossier, translation and authentication myself (the agency was of no help at all), t
he agency began telling us a variety of stories about what was happening in country. We were misled several times. Eventually, we discovered the agency did not have the resources to get the program off the ground but had continued to let us have false hope.

We quickly switched to another agency that had established programs in Africa, but was also starting a pilot program in another country. If something went wrong, we would have a back-up program. The agency was sincere in its desire to help children and optimistic about the new programs. We had renewed hopes but still some reservations. The program had to close right after our dossier was completed due to no fault of the agency. This agency was more helpful and supportive than our previous agency. After we completed our second dossier with this agency, we were back in the waiting stage for a referral. The agency that had initially been so helpful and optimistic became rather tight-lipped. The agency didn’t actually know how or when this new program would take shape. The timeline for a referral seemed to get longer while my heart grew heavier. We were no closer than we had been years before.

Not wanting to give up on my dream of adopting a child from Africa, I called Sonja from MLJ. After only 10-15 minutes, I felt a connection with her. She was kind, generous, and genuinely cared about the children and families she was helping. She said that she and the other members of MLJ would find my daughter. She said it with such confidence and sincerity that the nagging feeling in my stomach that had been there for years started to go away. MLJ had successfully united several Congolese children with forever families. MLJ also had staff in Kinshasa, unlike many other agencies who are merely contracting with people in country on a temporary or as-needed basis. MLJ had an established plan of action for the adoption process, but enough experience to be able to adapt to changes that inevitably come along the way.

Throughout the process, MLJ staff members were incredibly supportive. The dossier instructions were clear. MLJ handled the paperwork after our initial dossier was completed, unlike other agencies we had worked with in the past. The education through MLJ was also very relevant and comprehensive. MLJ is a resource for adoption parenting questions both before and after adopting. The staff is very supportive of adoptive families’ needs and worries. There are times during the adoption process when there is simply no news to tell you, which can be unnerving, but the staff understands that and will help in any way they can. I quickly learned that, when Sonja said that “no news was good news,” that is exactly what she meant. I also learned that Sonja was always honest with me and did not give me unrealistic expectations or dates.

True to her word, Sonja and the MLJ staff successfully brought home my beautiful daughter. I will be eternally grateful to everyone involved. The adoption process can be a heart-wrenching roller coaster. The most important lesson I learned throughout this journey was that it is imperative that the adoptive family have an honest and supportive agency that will advocate for them and stand with them through every part of the journey to bringing their child home.