Traditions in the Bulgarian New Year 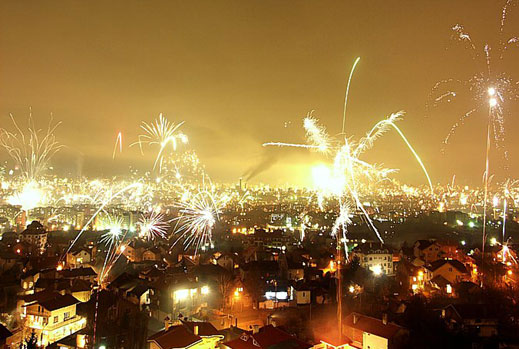 All across Eastern Europe, people welcome the new year with customs and special foods thought to bring prosperity and good luck. Bulgaria is no exception. New Years is a huge celebration for Bulgarians, it may even be a larger and more anticipated celebration than Christmas! This is because in Communist times the religious celebration of Christmas was discouraged. Christmas celebrations are comparatively silent to the boisterous celebrations of the New Year. There are festivals, processionals, carnivals, and sporting events throughout the entire week preceding New Year’s Day.

On New Year’s Eve across the country, families and friends may gather for a traditional feast rivaling their Christmas spread. In Bulgaria, they may enjoy a few meat dishes, a pig’s head, plain cake and a traditional flaky cheese pie called banica. In other Eastern European Countries, fish (usually pickled herring) is often served because the silver scales of fish are thought to symbolize money. Greens (usually cabbage) are also associated with money and thought to bring good fortune. However, you won’t find Eastern Europeans eating lobster or crab, as they are considered bad luck. It is thought that backwards moving animals are bad luck and could cause setbacks in the coming year.

In the evening, people crowd restaurants and bars, much like in the United States. At midnight, the President addresses the nation on television and the celebration ensues with fireworks and church bells. This is followed by wishes of good luck and prosperity in the coming year for loved ones. The celebration continues to the early hours of New Year’s Day.

On New Year’s Eve in Western Bulgaria and the Central Balkan Range, Ladouvane is also performed. This is a festival where young girls seek out husbands. The unmarried village girls each contribute a ring. The rings are then tied together with red string and added to a pot of spring water with symbols of fertility (oats and barley). The girls dance around the pot singing songs of love and prince charmings. The Ladouvane is followed by fortune telling called Vassilitza, where the fortune teller advises the girls of their romantic destinies. On January 2nd, the girls participating in Ladouvane confess who they like and give tokens of their love to the boys in the village.

On New Year’s Day, also referred to as St. Basil’s Day or Survaki in Bulgaria, many people will celebrate by leaving their homes and heading to the beach. Keep in mind that the average temperate this time of year is 32 degrees!

Celebrate New Years with a resolution to integrate the culture of your child’s country of origin into your family’s traditions throughout the year.
Photo Credit