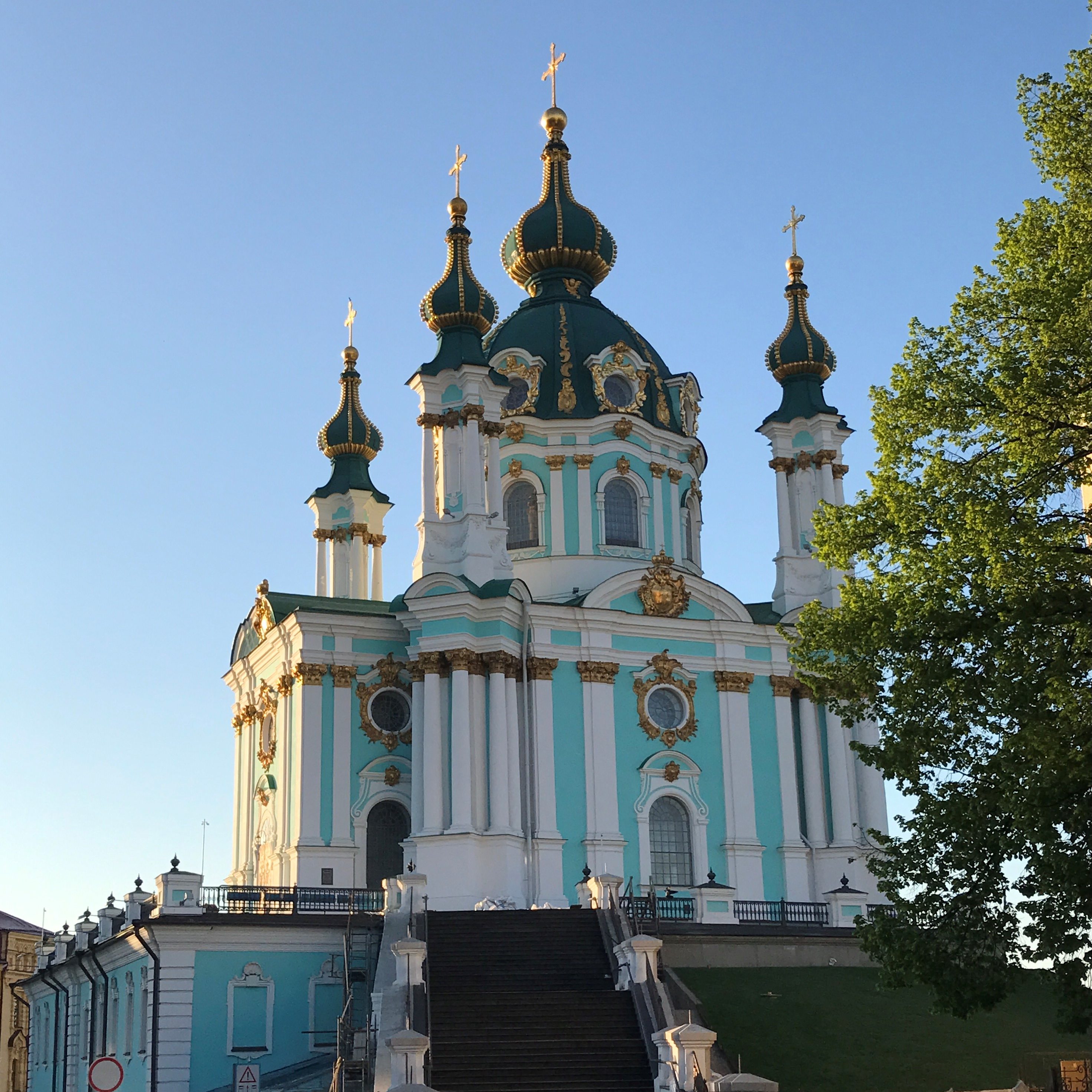 More than 20 million people visit Ukraine each year. Although it may seem “off the beaten path” to some, the modernization, rich cultural authenticity, amazing architecture, and incredibly hospitable natives made this trip one that will never be forgotten. I truly found the Ukrainian people we encountered to be pleasant, helpful, humorous, and friendly despite my inability to speak the language. Many of them do speak English. You will find accessible transportation options, affordable hotels, excellent restaurants, relaxing beaches, many parks and green spaces, museums, and ancient fortresses. Historic reminders are found in statues, markers and beautiful old Byzantine churches.

Ukrainians are very proud of their independence, whether from the Bolshevik Revolution of 1917 or the Orange Revolution in 2004. The country began with Vikings and Slavic tribes in the 10th century, Kozak control in the 15th-18th centuries, and then Soviet Union control in the 20th century. In the 1930’s, Stalin starved 3.2 million peasants in the Holodomor (death by hunger) and during the second World War, Ukraine bore the brunt of the Nazi drive to Stalingrad. Cities, towns and thousands of villages were devastated and 7.5 million people were lost. Despite this history, Ukraine’s new working democracy has prevailed and it is a wonderful country to visit. Taking the time to visit Maydan, or Independence Square, in Kyiv will give you a sense of the Ukrainian pride in their democracy. It is here that a million Ukrainian citizens from across the country occupied the square for two months during the harsh winter of 2004 to protest a fraudulent presidential election. Now, an ornate 200 foot column with a gilded figure of a woman is a reminder of independent Ukraine.

On your journey, you will likely arrive at the Kyiv Boryspil International Airport, a clean modern facility with restaurants, gift shops and other amenities. Public transportation is adequate and reliable in the larger cities of Ukraine and can include busses, trams (tramvay)and trolleys (troleybus), taxis, privately run minibuses (marshrutky), and trains. The Ukrainian trains run on time and are used for most long-distance travel while in country. They are convenient, relatively inexpensive and have an abbreviated food service on board. Several fast trains are non-stop to major destinations and are clean and comfortable. Overnight sleeping berths are available on these. You can also bring your own food and drinks on board which I recommend for the longer travel times.

Like many major cities in the US, you should guard against pickpockets with your purses, wallets and backpacks. As a tourist or short-term visitor, it is easy to become distracted by looking for directions, gazing at landmarks or cultural markers, or even any interesting activity around you and thieves are counting on this! Be aware and hold on to your valuables. One of the people in our group had some food taken from her backpack as she was walking down very crowded train departure stairs. Luckily, it was not a big loss. Although this is certainly not the norm, it is just good travel advice. 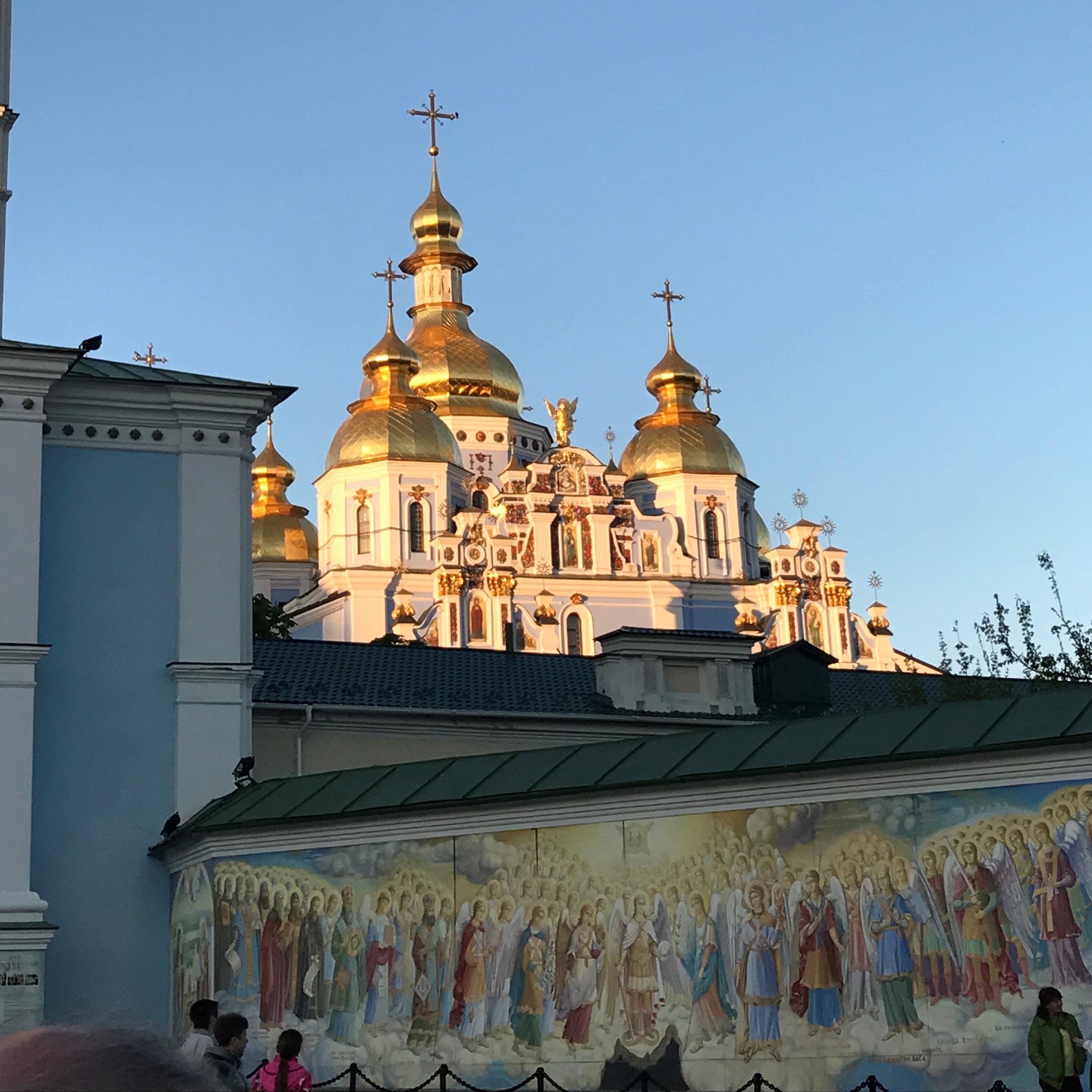 The currency used in Ukraine is the hryvna. Businesses are prohibited from accepting foreign currency, so change some of your money upon arrival. We learned this the hard way by having to return our grocery store purchases to the shelves because the market could not accept our American dollars. Official currency exchange kiosks, or obmin valyuty, are located in busy city areas, but airports, banks and hotels have them too. Master Card and Visa credit cards are accepted in most hotels, restaurants and larger businesses.

It’s exciting to shop for souvenirs in Ukraine! Traditional items like nesting dolls (matryoshka), amber jewelry, embroidery (vishyvka), woodcarvings (Rizba po derevu), painted eggs (pysanky), pottery (keramika), and other works of art are readily available at the open markets (bazars). Vendors generally speak English, prices are reasonable and they often accept American currency. My favorite was by Old Kyiv Hill, a winding cobblestone road going down to the Podil, or Lower Town. Known as “the slope”, vendors line both sides of the street with tables and tents full of new and antique merchandise. Good bargains are to be found!

I have always been fascinated by the incredibly beautiful Byzantine architecture and icons of the Russian Orthodox churches. No matter when you visit a church, you are likely to see people kneeling in prayer, lighting candles or kissing icons. The interiors of these churches typically have vaulted domes, mosaics, murals, and splendidly ornamented icons. Glass, gold, silver, and beautiful leaded glass are everywhere. Ukrainians profess their faith openly and respectfully. We covered our heads to enter several of the open active churches as a sign of reverence. There are various faiths practiced in Ukraine today, including Russian Orthodox, Ukrainian Orthodox, Ukrainian Greek Catholic, Roman Catholic, Armenian Catholic, various Christian religions, Judaism, Muslim, and Buddhism. In Kyiv, St. Sophia Cathedral, St. Michael’s Golden Domed Monastery, St. Andrew’s, the Assumption of the Virgin, and St. Volodymyr Cathedral are good churches to see.

When traveling from Kyiv to other parts of the country, you will see family farms, small villages and towns, medium size cities, remnants of Soviet factories and housing, the Dnipro (Dnieper) and Buh Rivers, low lying mountains, and even beach resorts on the Black Sea and Sea of Azoz. Depending upon the location of the orphanage you are traveling to, you will see some of these things. Ukraine is bordered by Poland, Slovakia, Hungary, Romania, Moldova, Russia, and Belarus, so you may want to visit some of these countries while you are in the area. Crimea, to the south, is an autonomous republic of Ukraine, not an oblast.

You will find that Ukraine is a great country and learning more about it will help you have more in common with your adopted child. Enjoy your travel there. I know I can’t wait to go back!