Why Adopt from Mexico? 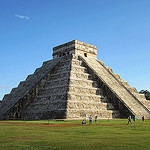 We boarded the large shiny tour bus in Playa del Carmen after a group stroll through the upscale shopping plazas and white adobe walled resorts of this Mexican Riviera city. Lush plants and flowers bordered the decorative signs telling tourists where to go for retail therapy, water sports and gourmet dining experiences. Our tour guide, Andres, and our driver, Mario, were both pleasant gentlemen who appeared skilled in dealing with demanding tourists and knowledgeable about their Mexican homeland. Their wide smiles and pleasant demeanors offered us a warm welcome and assurances that we were in for a pleasant 2 ½ hour trip to the Mayan ruins of Chichen Itza.

Andres began his lecture about Mayan culture and history by telling us that he was, in fact, a Mayan descendent. He explained that he was actually mestizo, or of both Mayan and Spanish blood, due to the eventual interaction of the 14th century Spanish explorers with Mayan tribes who emigrated from Siberia. Andres proudly noted that DNA testing and evidence of Mongolian spots on the base of the backbones support this information. Tales of Mayan hieroglyphic systems, ancient books covering mathematics, rituals, astronomy, and the lunar calendar, and buildings constructed with an unprecedented understanding of engineering and acoustics continued throughout our ride. Andres also lovingly described the talents and determination of his ancestors and the rich history left for their descendants.

The modern bus traveled easily on the smooth newly constructed highway which meandered through the jungle of the Yucatan Peninsula. The hot humid weather, bright sun and complete lack of additional vehicles on the road seemed unusual to us.

From the comfort of our air conditioned chariot, we noticed that there were no billboards, no mini-marts and no gas stations—just dense jungle on either side. Occasionally, we would come to an intersection of two highways, but even this was only populated with a couple of armed guards in battle fatigues with rifles strapped across their shoulders.

However, during the journey, we slowed down twice to pass through two tiny unmarked villages which seemed to bear the harsh reality of rural Mexican life—poverty, unemployment, inadequate resources, and scarce basic services. Concrete buildings and homes were sparsely furnished, not maintained, covered with graffiti, and often simply abandoned. Skinny malnourished dogs roamed the alleys looking for food or water and an occasional battered table would be set up along the roadside to peddle a few worn handmade goods. A couple of broken down vehicles with missing parts littered the street. No adults were visible. No signs of activity were present. Despite the dust which easily stirred as the big bus passed, my eyes were captured by four small mestizo children in a dirt yard playing tug-of-war with a battered and stained blanket, or what was left of it. No toys or backyard amenities were present. No caretaker could be seen even through the door less residences. Their beautiful dark hair and large eyes complimented their small sun tanned frames and they did not seem to notice the abject poverty around them. For them, this was their normal daily life. 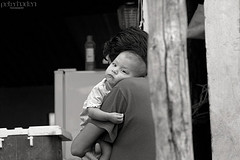 UNICEF (2010) reports that 53.8% of Mexican children live in poverty because sadly the standard of living has changed little in the past century. The average monthly income is less than $400 per family. Many children grow up desperately poor, malnourished and without medical resources or adequate sanitation. Such child poverty is very damaging; it can cause irreversible impact on their development. Both slums in larger cities and isolated rural villages can often be characterized by despair, disease and lacking the resources to meet even the most basic needs. The country’s infamous and widespread problems with drug violence and drug trafficking have taken an enormous toll on the population. Millions of children work and don’t attend school; many are at risk for exploitation by criminals. Consequently, this family economic hardship, the lack of access to or ability to pay for necessary medical care, and the stigma often attached to unwed mothers in this country with deep religious beliefs leads to the need for international adoption.

In talking with Andres while at Chichen Itza, I mentioned that I worked in International Adoption and Mexico was one of the countries with whom we proudly partnered. I asked him his thoughts on adoption and what I could do to help people understand the plight of Mexican and mestizo children. He acknowledged that the economic problems and influences of drug cartels sometimes made it difficult for families to support or effectively care for their children. He hoped that adoption opportunities would enable the children to have their needs successfully met and let them experience a life without violence and fear. However, he hoped that adoption would not keep them from understanding and knowing about their rich history, vibrant culture and the land of their ancestors. This, he said as he shook his head, would be what saddened him about children leaving their homeland.

The reasons for adopting from Mexico are many and the need is great. MLJ Adoptions can help you with your adoption journey in this country. However, as with all inter-country adoptions, it is crucial that adoptive families support and encourage cultural understanding with their adopted children. It is important to keep their heritage alive and help children foster an appreciation of the accomplishments of their ancestors. For Andres and Mario, this is the way to make international adoptions successful.

For more information about adopting from Mexico, please contact us.