Can We Talk About Childhood Trauma?

Recently someone approached me trying to understand why my child’s past traumatic experiences cause her to act out like she does. This person had also experienced trauma as a child, but did not have the emotional instability and behaviors that my child exhibits so he didn’t buy into my explanation about how trauma permanently alters the brain which CAN result in behaviors such as lying, stealing, deviance, manipulation and aggression. Children who are raised in an environment where their needs, emotions, safety and comfort are not consistently provided for may develop survival skills that allow them to cope and function on a daily basis. However, trauma doesn’t affect everyone the same, two children raised in the same orphanage adopted into families are likely to cope with their trauma differently, one may become aggressive while the other one has no behaviors at all and transitions well into a family environment. The same phenomenon occurs in siblings who were raised in the same family, while one child is emotionally stable and copes with adversity well and ends up having a successful career, another sibling raised in the same home with the same experiences, same parenting and same values may resort to alcohol and drugs and end up making many other poor life choices later in life. No two people are exactly the same, genetic factors as well as environment affect how a child will cope with trauma, thus no two people handle trauma in the same way and each may demonstrate different coping mechanisms if any at all.

Many children who join their family through adoption and have experienced trauma are resilient, able to cope, adapt to life in a family and don’t have a psychiatric diagnosis due to their trauma, but some children have trauma related disorders. A part of my job at MLJ Adoptions is to provide support to families after their child has joined their family. My job is to talk about and educate adoptive parents and those touched by adoption about trauma. Many children who join their families through adoption don’t have major issues and adapt well in their family environment. But it is our job to educate all adoptive parents on what the effects of trauma could look like in their child, so they are prepared to provide the appropriate support to their child if and when it is needed. In the adoption community we stress that families, “Prepare for the worst, hope for the best, and settle for anything in between.” 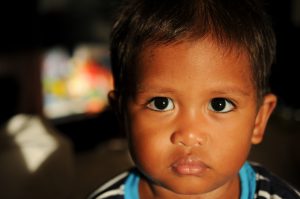 Helping a child process through their trauma starts with talking about it. Trauma cannot be healed by sweeping it under the rug. I recently listened to a TedTalk by Liz Mullinar, a survivor of childhood trauma and founder of the Heal For Life Foundation and she is on a mission to raise awareness about the impact of trauma. She quoted some pretty interesting statistics. She stated that according to academic research done in 2005, 69.9% of all psychiatric inpatients, with serious psychotic disorders, had suffered from childhood trauma. Of those diagnosed with bipolar disorder 82 to 86%, 90% diagnosed with borderline personality disorder, and 80% of people diagnosed with depression, all suffered from childhood trauma. Mullinar went on to share statistics about the effectiveness of treatment and the impact of talking about the issue of childhood trauma. She stated that six months after a five-day program there was a 45% reduction in measured serious mental illness. Her main objective was to urge people not to be silent about trauma, to talk about it and seek help. Mullinar closed the discussion with the following insightful thought: “I wonder what would have happened to this world, if someone had healed Adolf Hitler, from his much-acknowledged child abuse.”

Childhood trauma does not necessarily equal a mental health disorder, but if gone untreated or swept under the rug there is a higher risk that more serious issues could develop down the road. There is hope! Hope and healing that could be as simple as recognizing the effects of trauma, talking about it and processing through past experiences. Our brains are ever changing, and healing is possible with the right help. If you or your child has experienced childhood trauma please don’t wait, start the discussion with a trauma-informed professional and work towards healing.