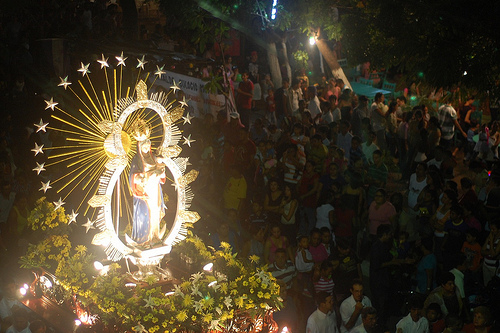 Although Christmas in Nicaragua is celebrated on the 24th, this Latin America country starts Christmas celebrations as early as the 6th of December. “La Purísima” or Immaculate Conception of the Blessed Virgin Mary, held on December 8th, is perhaps one of the most important festivities. An altar is created with the displaying of a statue and elaborate decorations, while prayers and songs are heard throughout the day, all in honor and praise of the Virgin Mary. Rockets, firecrackers, and other types of fireworks, known as “caraga cerrada” commonly light up the sky on this day.

There isn’t an empty pew in the churches of Nicaragua on December 7th. At 6:00PM sharp, a common ritual known as “La Gritería” takes place. One shouts out the question “Quién causa tanta alegría?” (Who causes so much happiness?) and everyone yells in reply “La Concepción de María” (Mary’s Conception). Religious festivities such as this amount to abundant presentations of nativity scenes, candles, presents, and beautiful flower bouquets throughout the country.

A white Christmas in Honduras can be enjoyed on the pristine white sandy beaches around the island of Roatán. Sandcastles are built and barbeque is grilled on this beautiful Caribbean island during a massive beach party that is held every year for Christmas.

Back on the mainland, Christmas is celebrated at the very stroke of midnight on December 24th. In the hours prior to midnight, families gather to pray with one another and read passages from the Bible that tell of the birth of Jesus. Afterwards, a special and very important meal is served. This meal can take several days of preparation and includes traditional Latin American food such as tamales, roast ham, chicken and rice, and torrejas. Torrejas, similar to what we know as French toast, is typically served as dessert, along with a Honduran Christmas drink known as rompopo. This liquored drink consists of milk, egg yolks, cloves, sugar, and cinnamon.

December 16th marks the beginning of “Las Posadas” in Mexico, which are reenactments of Mary and Joseph’s search for shelter in Bethlehem. A man and woman, sometimes whom are upon a donkey, venture from house to house looking for a place to stay and for their son Jesus to be born. The whole neighborhood participates in Las Posadas, singing traditional pilgrim songs, carrying candles, and following those dressed as Joseph and Mary. Just like in the Bible, they are turned down time after time until one innkeeper lets them in. After they are let in, everyone is to kneel and pray rosary in front of a nativity scene that has been set up.

Much like children in the United States ask Santa for presents, children in Mexico ask the Three Kings for the gifts they wish to receive. They write down their wishes, tie them to balloons, and send afloat. They open presents on January 6th, known as “El día de Reyes”. Festivities in Mexico do not come to until the beginning of February.

Whether you are adopting from Nicaragua, or have a general interest in international adoption from Latin America, it is always fun to learn about other cultural holiday traditions. Adopting a child internationally introduces a new world to a family and it is one to embrace. It is important to celebrate the culture of our children, regardless if they were adopted from Eastern Europe or adopted from Africa. Be sure to read our other blogs on celebrating Christmas around the world. Merry Christmas, Feliz Navidad, Merry Noël……to all of you from all of us at MLJ!